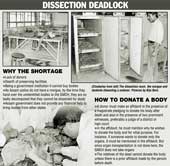 Oct. 17: Facing an acute shortage of human bodies, the Gauhati Medical College and Hospital (GMCH) authorities have decided to highlight the example set by CPM activist Ellora Roychoudhury to prompt the city’s literate section to donate their bodies for research.

Ellora died of cancer — she was only 34 — at her Hedayatpur residence on May 15. After coming to terms with the fact that she would not be cured of the disease, the CPM activist asked her husband to prepare a will, pledging her body to the GMCH after her death for the cause of “advancement of medical science”.

In accordance with her last wish, the cortege bearing Ellora’s body came to a halt at the hilltop GMCH on that bright and sunny day in May. Her husband Isfaqur Rahman and six-year-old son Philbi derive strength and solace from the knowledge that the person they loved has become immortal even in death.

This month, a couple from Nalbari travelled to the GMCH to pledge their bodies for medical research and their eyes for donation. Teachers of the medical college tried to persuade the couple to speak about themselves, but they refused. The persuasion reached such a stage that one of them snubbed an official, saying: “We are common people.”

However, the authorities recognised the couple on seeing their names on the written statements. The donors, it transpired, were Nalbari-based academic Sashi Sharma and his wife Binapani Devi.

Apart from Ellora and the Sharmas, the GMCH has added the names of a couple of other donors to its campaign roster. The list includes Dilip Bose, a former president of the Commercial Representatives’ Union, Northeast, and “two gentlemen” from Hojai.

In separate but identical wills, the Sharmas said they wanted to authorise the GMCH to take their bodies after their death and make use of them in research in the field of medical science.

Justifying his decision to donate his body, Sashi Sharma said: “Of what use will be the ashes of my body? It will be far better if my body, instead of being reduced to ashes, can be utilised for the benefit and welfare of mankind.

The GMCH should be at liberty to transplant my cornea on any needy person, more particularly to a poor person.”

Students of various streams of medicine and the paramedical sciences, including nursing and physiology, get acquainted with the intricacies of the human anatomy through the study of cadavers.

Initially, groups of them study a body by dividing it into three or four sections. However, students at the post-graduate level require a body each for research.

The GMCH requires a minimum of 20 bodies every month, but getting even half the requirement is a problem. In the 42 years of its existence, the medical college has been dependent on the police for supply of unclaimed bodies. But it so happens that by the time an unclaimed body is handed over to the institution, it begins decomposing.

The GMCH authorities are hoping that their body-donation campaign, bolstered by Ellora’s example and the promise made by the Sharmas, will inspire people to pledge their bodies for medical research.

Thanking the Sharmas for their noble gesture, the officiating principal of the GMCH, Dr T.R. Borbora, said the perennial shortage of bodies for research was “crisis number one”.

The GMCH does not have adequate facilities to preserve the bodies. As of now, it has just three refrigerators for storage of cadavers, while three more are non-functional. Worse still, the dissection room is in a dilapidated condition. The room has not been renovated in the past 15 years. “Ideally, the dissection room should be air-conditioned to prevent damage to a body,” a doctor said.

The absence of a taxidermist for preservation of bodies — formaldehyde injections are necessary at regular intervals to prevent these from decomposing — has long been felt by the GMCH. Sweepers double up as taxidermists at the region’s premier hospital.

“Because of the scarcity of bodies, we have to perform several demonstrations on a single body. This is inadequate for the students, who require more practical knowledge of the human anatomy,” a professor of anatomy said.