The move is to encourage women’s cricket in Assam 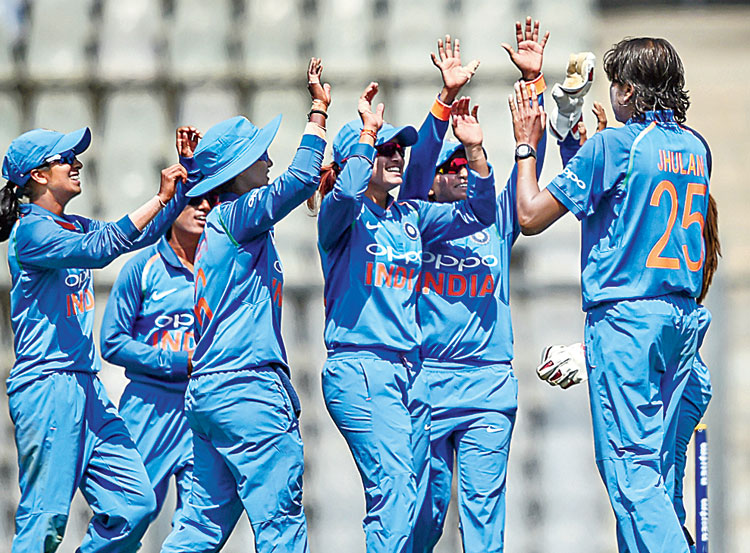 India’s Jhulan Goswami celebrates with the teammates after the dismissal of England’s Tammy Beaumont during the third ODI in Mumbai on Thursday
Picture by PTI
Abdul Gani   |   Guwahati   |   Published 28.02.19, 07:45 PM

In a bid to encourage women’s cricket in the state, the Assam Cricket Association (ACA) has made entry free for the three T20 international matches between India and England to be played at ACA stadium at Barsapara in the first and second week of March.

The English, who are touring India, will play the three T20 matches on March 4, 7 and 9 here.

ACA secretary Devajit Saikia said they are targeting the school and college girl students to come and watch the matches.

“We could have earned some revenue by selling tickets but our main agenda is to popularise women’s cricket. I think these three matches will help a lot to motivating the young girls to play the game,” Saikia told reporters at a news conference here on Thursday.

There are around 150 registered women cricketers in the state. The ACA is also hoping to organise a zonal tournament to boost women’s cricket. “We do not have women teams in all the districts. So, we will divide the state in six zones for the tournament. This will also help encourage the girls to play cricket,” Saikia added.

For the spectators, the north and south stands will be opened initially.

The teams will start arriving from March 1 and also start their practice from the next day.

The matches will start from 11am to 1.45pm. Though it was scheduled to start from 10 in the morning, the timing was postponed for an hour following the request from the team managements of both the sides.

The ACA stadium has already successfully hosted two international cricket matches — T20 against Australia and an ODI against the West Indies in the past two years.