Five of Assam family die by suicide over ‘debt’ 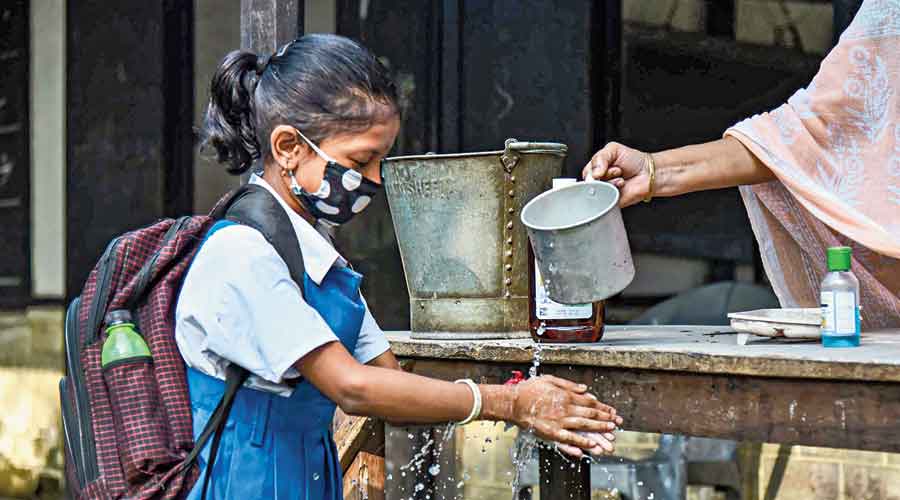 A student washes her hands at Chamata Girls School at Chamata in Assam’s Nalbari district on Monday after schools re-opened after over seven months
PTI
Umanand Jaiswal   |   Guwahati   |   Published 03.11.20, 12:55 AM

Five members of a family allegedly died by suicide at their rented residence in lower Assam’s Kokrajhar district on Monday apparently because they were “heavily” in debt.

“The incident came to light around 8am on Monday when a neighbour went to their Assam-type house to check if everything was fine since none of the family members were seen since morning. They were found hanging in the same room,” police said.

Paul used to run a small LPG retail outlet at Tulshibil, around 40km from the Kokrajhar district headquarters. Malika was a homemaker, while Puja used to teach in a school after graduation. Neha and Sneha were preparing for their Class XII and Class X finals respectively.

Some residents in the neighbourhood said Paul had run up a debt of anywhere between Rs 25 lakh and Rs 30 lakh, which could have led the family to take the extreme step.

Kokrajhar superintendent of police Rakesh Roushan told The Telegraph that prima facie it seems the family members committed suicide because Paul was heavily in debt and was under pressure to repay.

“We found a board in the room where they hanged themselves where it was mentioned about the huge loans Paul had taken from several people. A probe is still on but we cannot link the suicide to lockdown or poverty,” Roushan said.

Utpal Roy, a student leader, said it appeared Paul took the loans from about 30 people around a year or one and half years ago. The purported timeline suggests the loans preceded the lockdown.

A government-sponsored study on the impact of the coronavirus-induced lockdown had found that the crisis would not only affect trade and business but nearly 50 per cent of the state’s population may slip into poverty if the unemployment rate of 8 per cent more than doubled.

The residents told reporters that Paul, who originally belonged to Goalpara district, had been living in a rented house at Tulshibil, a mofussil market area, for over two decades. Tulshibil is a minority-dominated area and has about 300 big and small shops.

“He was an amiable man who used to run a LPG sub-agency. He is said to have run up a huge debt which he was unable to pay. We have heard he was getting constant calls from lenders to repay. Lenders also used to land up at their residence, something which the family could not cope with and decided to end their lives,” Utpal Roy said.

Tulshibil police said that preparations were on to cremate the bodies. “Paul’s family members and relatives have arrived. They will decide when the cremation will take place,” a police officer said.