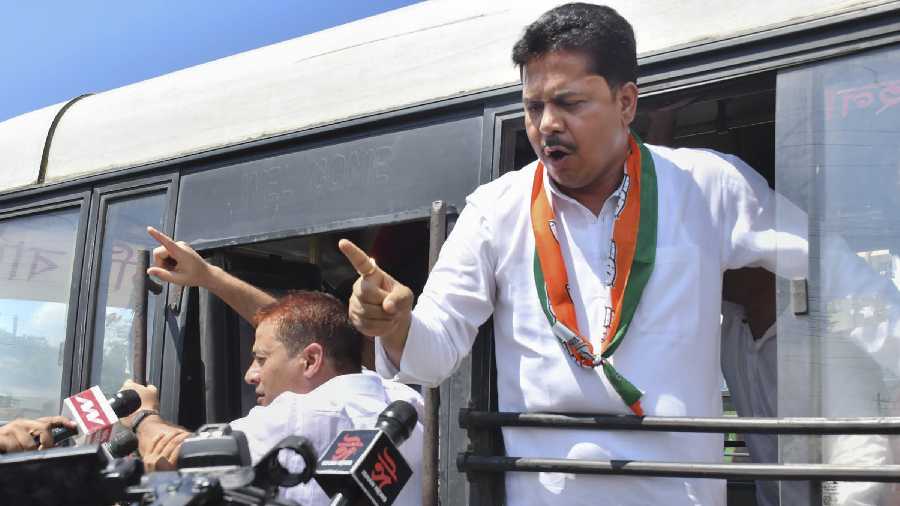 The Assam unit of the Congress on Friday staged demonstrations near a luxury hotel where rebel Shiv Sena leader Eknath Shinde and other Maharashtra MLAs accompanying him are staying demanding that they leave the state as it is reeling under a devastating flood.

Assam Congress chief Bhupen Bora also wrote a letter to Shinde telling him that their presence at such a critical juncture has "defamed" the state.

Congress leaders were not allowed to enter the hotel and a police official deployed there was requested to hand over the letter to the Sena leader.

Slogan-shouting party workers demonstrated near the hotel for some time.

The Shiv Sena-led coalition government in Maharashtra, of which the Congress is a part, is facing a crisis following the dissidence of a section of its MLAs led by Shinde.

Assam is a land where people give a lot of respect to ethics and values but "your presence in Guwahati with the MLAs of the ruling Shiv Sena from Maharashtra, who have been kept in a hotel for alleged horse-trading to topple the elected

Maharashtra government and the continued media coverage of the same, has not gone down well with the people," Bora said in the letter to Shinde.

"Assam has been defamed by your presence," he said in the letter.

The BJP government's alleged support to Shinde's presence here has sullied the image of Assam and its people, Bora alleged.

The Congress leader claimed that the flood-affected people are suffering severely in absence of adequate relief and when the state is faced with devastation, "your presence here and the activities of the state in providing royal hospitality to you, is quite unfair and unacceptable".

Assam has seen towering political personalities but the present Chief Minister Himanta Biswa Sarma has "proved himself to be nothing but a wheeler-dealer encouraging and supporting political horse-trading in the state", he alleged.

Sarma and his government machinery should be busy with flood management but the presence of the rebel MLAs here has proved to be a hindrance, the Congress leader said.

"Considering the damage that you have caused to Assam and its people by your presence, I would like to advise you to leave Assam at the earliest in the greater interest of the state," Bora added in the letter which was shared with the media.

Shinde and a group of other Maharashtra MLAs are staying in the hotel since they arrived here from Surat on Wednesday morning.

Not given up yet, says Uddhav