Bid to defuse inter-state tension between Assam and Nagaland 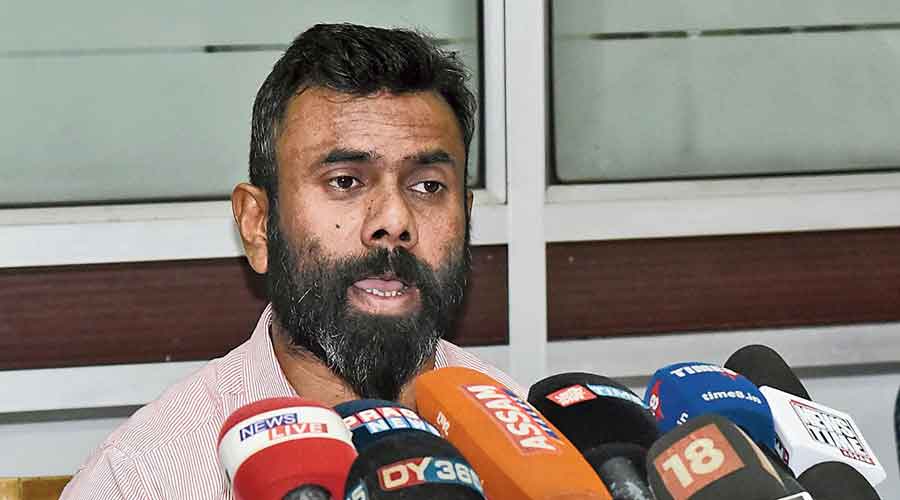 Assam and Nagaland have decided to hold a high level meeting as soon as possible to defuse the tension in the Mokokchung-Jorhat inter-state border triggered by the alleged firing from the Nagaland side on senior Congress MLA Rupjyoti Kurmi when he had visited the area on Thursday afternoon.

Sitting Mariani MLA Kurmi on Friday sat on an indefinite fast near the border seeking removal of all structures set up on Assam’s territory in the Desoi Valley Reserve Forest where he had gone to check reports of fresh encroachment by people from Nagaland. Though Kurmi withdrew the fast by Friday night following an assurance from the administration to look into the alleged encroachment, he filed an FIR seeking a probe into the firing incident.

“I had gone to the border area with around 45 people, including media persons, five police personnel and locals, on an inspection following reports of fresh encroachment. I saw around six-seven houses there. We were fired upon from the Nagaland side. Some 1,000 hectares have been

encroached upon in the area. My demand is that they be evicted within 48 hours and status quo be maintained,” Kurmi said.

Both Nagaland and Assam claim the area as their own.

Assam and Nagaland share a 512km inter-state border and border disputes between the states are over six-decades old. Besides Jorhat, Sivasagar, Charaideo, Golaghat and Karbi Anglong districts of Assam share border with Nagaland.

Mokokchung DC L. Jamir told The Telegraph on Friday evening that both states would hold a high level meeting to de-escalate the situation.

He said the first shot was fired by the Assam group, which went to Vikuto village that Assam claimed had been set up on its territory.

“The village was officially recognised in 2012. A 60-70 member group, including policemen, from Assam, had visited the site on Thursday afternoon and started firing. Our villagers got scared and fired in the air in self-defence,” the senior official said.

He said senior officials were camping in the area to ensure the situation did not escalate.

“Senior officials are camping in the area to defuse the situation, which is under control. We have deployed a section of the IRB in the area. We are all for peaceful coexistence,” Jamir said.

Assam’s special DGP G.P. Singh, after a stock-taking visit to the border on the direction of Assam chief minister Himanta Biswa Sarma, tweeted that Nagaland representatives have been “strongly advised to disengage from the area immediately”.

“It was decided to hold a DC/SP level meeting within three days followed immediately by an IG border-level meeting. DFOs of Jorhat and Mokokchung would carry out joint visits in the area to ensure that there’s no encroachment,” he said.

Singh said he had extensive discussion on “encroachment by people of Nagaland” in the reserve forest  in “violation of protocols and court orders”.

“Inputs about encroachment and violation of Hon Supreme Court orders would be reported to Government of Assam formally by DC and SP immediately to enable GoA to take lawful recourse. Hopeful of quick resolution of situation. @DGPAssamPolice@DGP_Nagaland,” Singh tweeted.

Inputs about encroachment and violation of Hon Supreme Court orders would be reported to Government of Assam formally by DC and SP immediately to enable GoA to take lawful recourse. Hopeful of quick resolution of situation. @DGPAssamPolice @DGP_Nagaland

Dibyajyoti Saikia, a local youth, claimed that the reserve forest had been mostly encroached upon. “Why should only Assam maintain status quo? The forest is almost cleaned,” he said.

Efforts have been made by the Centre and the states since 1971 to resolve the disputes but to no avail. Assam moved the Supreme Court in 1988. The apex court has asked both the states to maintain status quo in the disputed border areas till a final solution is found.

Nagaland was carved out of Assam and formed on December 1, 1963. While Assam insists on going by the constitutional boundary decided in 1963, Nagaland wants to go by the historical boundary — the area under undivided Naga Hills till 1826 when the British annexed Assam.

According to Assam’s revenue department, people from Nagaland have encroached upon over 19,819.62 hectares.

Assam also has border disputes with Arunachal Pradesh and Meghalaya. Last year, there were several border flare-ups with Mizoram.