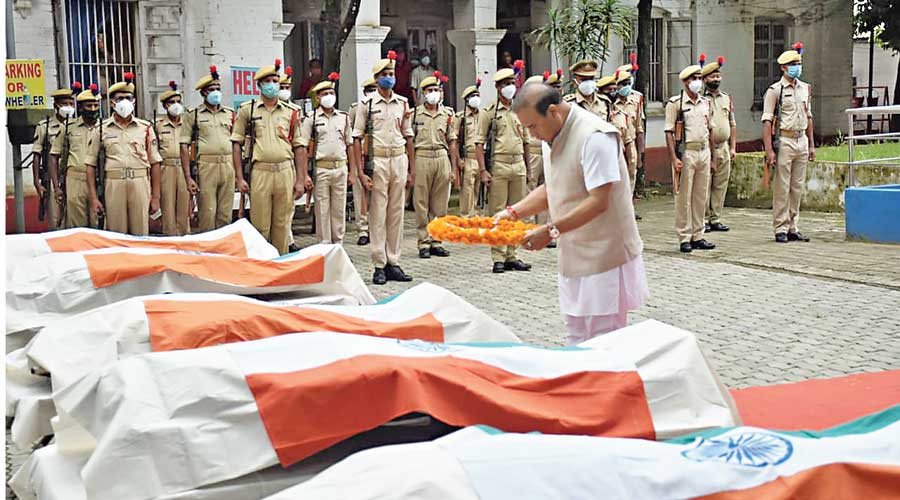 The Union home ministry has convened a meeting with senior Mizoram and Assam officials in New Delhi on Wednesday to find ways to douse the inter-state border dispute that left six Assam policemen dead and another 45 injured on Monday.

The clashes took place two days after Union home minister Amit Shah discussed inter-state border disputes in the Northeast at a meeting with chief ministers from the region.

No untoward incident has been reported since Monday night but the inter-state border area is tense.

Sources from Lailapur in Assam’s Cachar district and Vairengte in Mizoram’s Kolasib district, the sites hit by the violence on Monday, said no one ventured out with vehicles despite heavy security deployment.

Cachar residents have imposed a blockade at Kabuganj, about 26km from the border, disrupting traffic movement. The Barak Democratic Front in Assam has called a bandh on Wednesday.

Official sources in Aizawl and Guwahati said the chief secretaries and the police chiefs of both the states have been summoned by the Union home ministry for a meeting with home secretary Ajay Kumar Bhalla.

This will be the second meeting between the Union home ministry and officials from the two states since July 9 on the border skirmishes. The last was inconclusive.

Assam and Mizoram have blamed each other for the “unfortunate” developments but those following the skirmishes said it was a tragedy waiting to happen since June-end when a fresh round of flare-up erupted.

Mizoram was a part of Assam till 1972. Efforts for a breakthrough since 1995 to resolve the border dispute have not made much progress.

While Assam has a BJP-led coalition government, the Mizo National Front (MNF) governs Mizoram. The MNF is part of the BJP-led NDA at the Centre but the two political forces are not allies in Mizoram.

A Union home ministry media note on Tuesday said the Centre had been unwavering in its focus on inter-state disputes. It said such problems could be resolved only with the cooperation of the state governments and that the Centre acted as a facilitator for amicable settlement of disputes in the spirit of mutual understanding.

Assam chief minister Himanta Biswa Sarma on Tuesday said in Silchar the state would not concede even an inch of land to Mizoram. He said his government had decided to deploy three commando battalions in Cachar, Karimgaj and Hailakandi districts bordering Mizoram.

Sarma said on Tuesday night that one more policeman succumbed to his abdominal injuries, taking the death toll to six since Monday.

Some of the injured policemen have been shifted to Guwahati for treatment. The Cachar superintendent of police was airlifted to Mumbai.

Sarma announced an ex gratia of Rs 50 lakh to the next of kin of each of the deceased and a government job for a member of each family.

The injured police personnel will receive Rs 1 lakh each while those deployed along the 164.6km-long Assam-Mizoram border will get an additional payment equal to a month’s salary.

Sarma said clear evidence was emerging that Mizoram police and those backed by them had fomented trouble, adding that Assam would seek the intervention of the Supreme Court for the protection of the inner-line reserve forest from destruction and encroachment by Mizoram residents.

“Six jawans laid down their lives to save the land of Assam and save the forests of our country. We will keep dying but will not give away our land. We will resist and retreat but not open fire at our countrymen. Assam is a responsible state and will behave responsibly. I will personally see to it that there is no economic blockade disrupting the supply chain to Mizoram as the state does not have any other gateways,” Sarma said.

A seven-member Congress delegation led by newly appointed Assam unit president Bhupen Kumar Borah will visit Cachar to take stock of the border situation on Wednesday. Mizoram home minister Lalchamliana had said on Monday that “around 200” armed Assam policemen led by an inspector-general of police had reached the Variengte autorickshaw stand around 11.30am on Monday and damaged several vehicles travelling along the national highway between Vairengte and Lailapur, a trigger for the subsequent flare-up.

On Tuesday, Lalchamliana accused the CRPF, deployed along the disputed inter-state border, of failing to carry out its “responsibility” as a neutral force.

Lalchamliana alleged that CRPF personnel had allowed Assam forces to enter Mizoram and forcibly take over a duty post manned by the Mizoram police on the outskirts of Vairengte.

Another Mizoram minister, the local MLA and the village council chief of Vairengte levelled similar allegations.

Central paramilitary personnel are deployed along the Mizoram-Assam border by the Centre to defuse tension and maintain peace. While the CRPF is deployed on the Mizoram side, the Sashastra Seema Bal (SSB) is camping on the Assam side in Lailapur.

“The central paramilitary jawans (of the CRPF) were not honouring their responsibility as a neutral force to maintain peace and prevent violent clashes,” Lalchamliana said.

He claimed that CRPF jawans refused to provide protection to the Kolasib SP and other police officers when they rushed to the camp of the paramilitary force at the time of exchange of fire between forces of Mizoram and Assam on Monday.

Lalchamliana has spoken to CRPF inspector-general Sarbjit Singh and urged him to look into the matter and take necessary action, an official statement said.

According to the statement, the CRPF will probe the allegation that some Mizoram police officers were denied security during the clash.