The blaze continues to rage for the fifth straight day 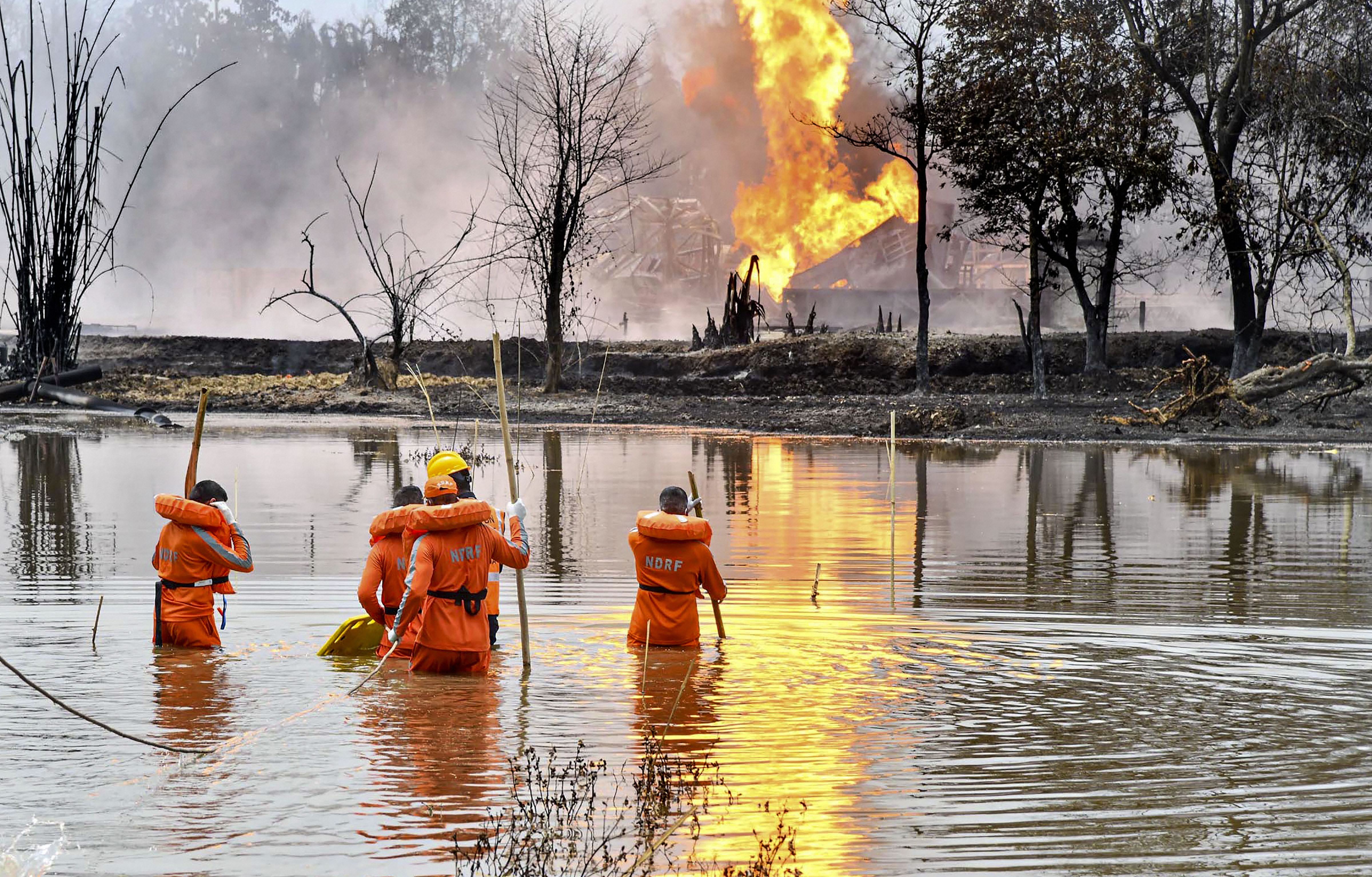 The Baghjan gas well fire in Assam has not only “almost irreversibly” harmed a wetland famed for its birds but is set to trigger a local livelihood crisis, an ecology expert told The Telegraph on Saturday.

The fire continued to rage for the fifth straight day with local people complaining about continual tremors as well as the ear-splitting sound that has persisted since the well started spouting a petrol-like substance and natural gas 17 days ago.

Pollution from the blowout and the fire at Baghjan, about 530km east of Guwahati, has contaminated water bodies, devastated tea plantations and vegetable fields, and forced about 7,000 residents to be sent to 14 relief camps.

Oil India Limited, which operates the gas well, has drafted in the Jorhat-based CSIR-North East Institute of Science and Technology to study whether there is any induced seismicity from the May 27 blowout.

Partha Jyoti Das, one of the authors of an international study on the nearby Maguri-Motapung Beel (wetland) that was published in 2016, said the blowout and the fire were among the “biggest industrial and ecological disasters” in India.

They have significantly damaged an area that is a “living natural and cultural heritage”, he added.

The wetland and the adjoining Dibru-Saikhowa National Park, located about 900 metres from the gas well, are home to 36 species of mammals, 500 species of birds, 105 species of butterflies and 108 species of fish, the 2016 study said.

“The Maguri-Motapung Beel, about 500 metres from the gas well, has been harmed almost irreversibly. A livelihood crisis is waiting in the wings. Restoration will require not less than two to three years of sincere and sustained efforts,” said Das, head of the water climate and hazards division at Aaranyak, a Guwahati-based wildlife organisation that conducted the field survey for the international study.

According to the study, conducted between 2013 and 2015, at least 8,000 people living on the Beel’s fringes depend directly or indirectly on the wetland and its ecosystem for their livelihood.

“For more than 80 per cent of this 10,000-plus population, fishing and fishery-related activities are a major source of livelihood, followed by agriculture, homestead tea gardens and livestock rearing,” Das said.

“A large number of local people earn their livelihood from eco-tourism-related activities, such as running eco resorts, serving as nature guides, and providing boat services around the Beel and the Dibru river. Almost all livelihood options have been affected because of the blowout, which has triggered heavy air, land and water pollution.”

The 2016 study was part of the Himalayan Climate Change Adaptation Programme implemented by the Kathmandu-based International Centre for Integrated Mountain Development in collaboration with other groups.

Following the blowout, a demand has been growing for a reassessment of the permission granted in May by the Union environment minister for exploration and extraction of oil and natural gas from seven new locations within the Dibru-Saikhowa National Park.

Das said the disaster had revealed weaknesses in Oil India’s safety-management and disaster-mitigation capabilities, and this was the primary reason the environmental clearance for fresh hydrocarbon exploration in the park should be reassessed.

Aaranyak CEO Bibhab Talukdar had on Friday sought a law to protect eco-sensitive zones on the lines of legislation that shields agricultural zones from mining operations in Tamil Nadu.

On Saturday, the Opposition Congress staged a dharna in nearby Tinsukia town, seeking immediate compensation for the affected families and a review of the permission for oil and gas explorations inside the national park.

Das suggested a comprehensive and time-bound assessment of the disaster’s impact by a team of international, national and local experts.

He said the same group of experts should then recommend an integrated ecological restoration plan that should be implemented meticulously till the wetland and its surroundings were restored to their previous state.

“The state government and Oil India must also ensure speedy rehabilitation of the livelihoods of the affected people, particularly because the pandemic-induced return of migrant workers from outside the state will only aggravate the livelihood issues,” Das said.

He stressed: “Short-term cash benefits will not be enough.”

Oil India is transferring Rs 30,000 to each affected family in the form of emergency relief.

The Centre and the state government have ordered separate inquiries into the blowout.

The visit comes amid daily protests by the affected families and students’ organisations that have disrupted Oil India’s local operations.