The delegation cited problems faced by ex-Assam Rifles personnel and their kin, highlighting the threat to their life and property following the arson carried out by a mob on December 11 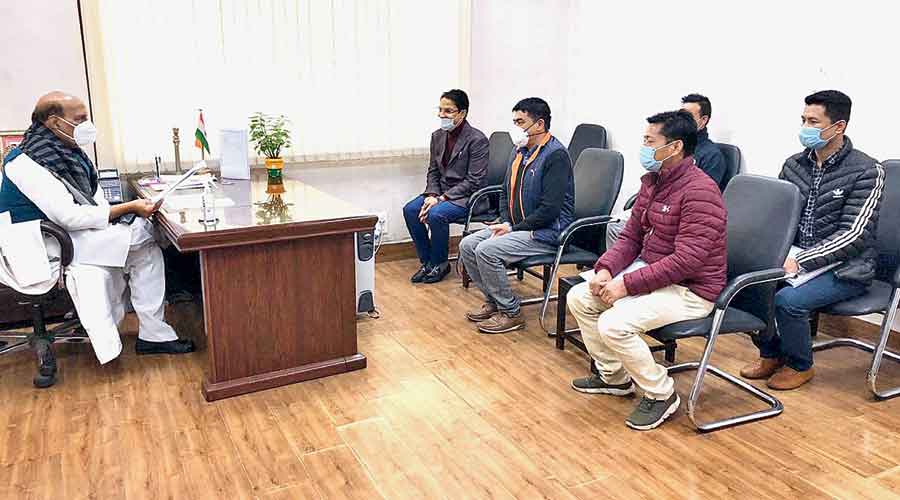 A Gorkha delegation from Vijaynagar in Arunachal Pradesh has moved the Centre seeking a “permanent solution” to the problems faced by ex-Assam Rifles personnel and their descendants in the area, highlighting the threat to their life and property following the arson carried out by a mob on December 11.

Though there was no loss of life in the arson, at least three government offices were burnt down on Friday under Vijaynagar administrative circle in Changlang district by a mob allegedly led by the All Yobin Students’ Union (AYSU). Around 39 persons have been arrested in six cases registered in connection with the arson.

The protesters were demanding cancellation of voting rights to non-indigenous people, mostly ex-Assam Rifles settlers, and their removal from the area as soon as possible.

The AYSU brass in a video released after the arson had purportedly claimed they are ready to give up their lives to save their land and the settlers should move out as “their 30-year lease is over”.

The state government had deferred the December 22 polls in Vijaynagar even before the arson.

The population of Vijaynagar, around 250km from the Changlang district headquarters and around 157km from Miao circle, is about 6,000, half of whom are non-Arunachali tribes. The ex-Asaam Rifles settlers include mostly Gorkhas and few families from Assam, Bihar, Mizoram, Uttarakanhd. Today, the population of Gorkhas will be about 2500.

In a 11-page memorandum submitted to Union defence minister Rajnath Singh on Thursday, the delegation from Vijaynagar has said the settlement of ex-Assam Rifles personnel at Vijaynagar bordering Myanmar was carried out jointly by the Centre and the erstwhile North East Frontier Agency (NEFA) in a phased manner for clearing forest patches and building makeshift huts.

“Therefore, 200 families of Assam Rifles personnel were airlifted with basic necessities and settled in 4 different subsequent batches — 1st Batch (25 families) during 1967-68; 2nd Batch (25 families) 1968-69; 3rd Batch (52 families) 1969-70 and 4th Batch (100 families) during 1970-71 and were re-grouped into nine villages,” the memorandum, recounting the reasons for the settlement of the AR personnel and their arrival in the area. It also quoted from a book and official documents on the issue.

“It was none other than our fathers/forefathers (7th Assam Rifles) who explored the un-administered and un-demarcated area i.e. Vijaynagar. Nari Rostomji, then the Adviser to Governor of Assam in his book Enchanted Frontier (1971) wrote it in the following words, “Much of the credit of opening Vijaynagar must go to our gallant Inspector General of Assam Rifles (IGAR), Ajit Guraya, who with his tough band of Gorkhali Jawans, trekked for two weeks through thick, pestilential jungle to reach the broad and lovely valley that bears today the name of his son Vijay,” the memorandum said.

JS Rawat, a Vijaynagar resident and part of the four-member delegation that met defence minister Singh, told The Telegraph, they have conveyed their problems with necessary background and documents. The delegation was accompanied by Darjeeling MP Raju Bista who even spoke to Arunachal East MP Tapir Gao. “The arson was the latest threat we faced. We have been facing similar threats from before. We did not settle on our own in Vijaynagar and we don’t want any confrontation with any organisation or indigenous tribes.

the state government permanently settle our land and other problems. Our forefathers came to Vijaynagar in the country’s interests and it is now the country’s responsibility to look after our interests.

“There was no question of lease when we were settled, this was incorporated by the state government 20 years after we were settled in Vijaynagar,” Rawat said.

The defence minister has “assured” all possible security measures for their safety in Vijaynagar and also to take up the matter with the state government to find a permanent solution, Rawat said, adding they have been living in “sub-human” conditions for ages now but we are staying put to safeguard the nation’s interest, which was the “only” objective of our settlement.

“Security has been beefed up after the arson but what will happen after security is withdrawn. That is why we want a permanent solution,” Rawat said, adding they were also planning to move the Supreme Court which is “aware” of their problems.

The All Yobin Students’ Union has claimed the crackdown launched by security forces has triggered panic in the area, leading to harassment of the public.

Seeking withdrawal of security forces, the Union also alleged that the administration has suspended internet service forcing people to walk five-six days to Miao to send “one” message.

Vijaynagar, one of the remotest administrative circle in the country, received 2G mobile service through BSNL only in August.

The Yobin community, the AYSU said, will continue its fight to protect its land at all cost. Yobins, also known as Lisus, are also found in Myanmar and China.