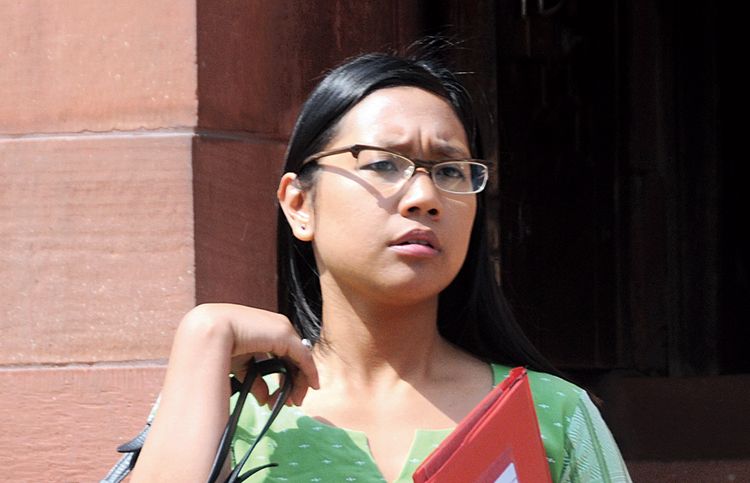 A few hours before the Lok Sabha gave its nod to the Citizenship (Amendment) Bill, a video was widely circulated on social media showing Tura MP Agatha K. Sangma speaking on the legislation.

The first few lines of her speech were enough to spark an outrage. “I am a lone member of my political party, the National People’s Party. I rise here today to extend my support to this amendment bill,” Agatha told the Lok Sabha.

That Agatha chose the words “extend my support” was good enough for her detractors and those who vehemently oppose the bill to call her out. Social media was flooded with outrage. People termed her support to the bill as an act of “betrayal” not only to Meghalaya but the entire Northeast.

They appeared shocked as it was the NPP-led government in Meghalaya which had submitted a resolution to Union home minister Amit Shah on November 30, emphatically expressing its opposition to the bill.

In justification of her party’s support to the bill, she also said, “I would like to give certain reasons for it. I would like to thank our honourable home minister for the extensive consultation that took place before this bill was tabled. Previously, when this bill was put in the House, there was no consultation and my party opposed this vehemently because the northeastern states’ concerns were not taken into consideration.”

She said this time Shah was able to put the “major issues” to rest because states like Arunachal Pradesh, Nagaland and Mizoram have been exempted as they have the ILP regime and the same will be extended to Manipur. “My own state Meghalaya, 97 per cent of which comes within the Sixth Schedule area is exempted, and Assam and Tripura as well,” she added.

She had a sole request to Shah — exempt the “entire Northeast” from the bill and not just the areas falling under the ILP or the Sixth Schedule.

Agatha further sought a “small clarification”. “In case we have applicants who are already residing in Meghalaya and they receive citizenship post-fulfilment of all the technicalities, is there a plan to relocate these citizens to another area? I would request the home minister to give certain clarifications that all the applicants coming from the exempted areas of the Northeast, where would they be relocated in case they are found eligible for citizenship?”

She hoped that Shah and Prime Minister Narendra Modi would to be “open” in discussing issues that the states of the region might face in the future. “I believe many problems may occur and issues will need to be addressed. I request the home minister, Prime Minister to kindly be as patient and as open-hearted as they have been previously with us,” she said.

Agatha’s counterpart from Shillong, Vincent H. Pala of the Congress, proposed an amendment to the bill. “Nothing in this section shall apply to the states of Arunachal Pradesh, Assam, Manipur, Meghalaya, Mizoram, Nagaland and Tripura,” Pala’s proposed amendment read.

During the voting on amendments, Pala refused to withdraw the amendment and stood his ground. Speaker Om Birla put it to vote. It was defeated by voice vote.

Unlike Pala, Agatha sided with the majority of the Lok Sabha members.