The Krishak Mukti Sangram Samiti (KMSS), a peasants rights group, on Friday staged a two-hour protest at Kaziranga National Park against the Centre's policy to allow private firms to adopt the park under its Adopt a Heritage project. 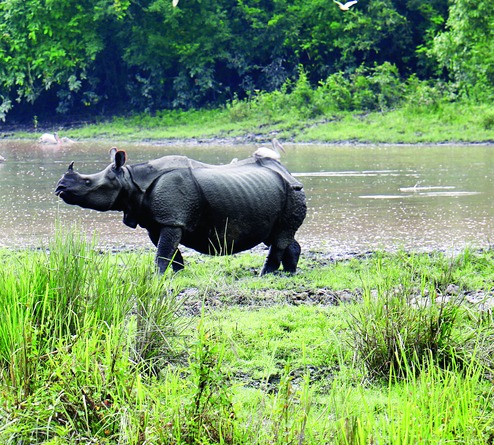 Guwahati: The Krishak Mukti Sangram Samiti (KMSS), a peasants rights group, on Friday staged a two-hour protest at Kaziranga National Park against the Centre's policy to allow private firms to adopt the park under its Adopt a Heritage project.

Hundreds of KMSS members and supporters gathered in front of the park's Kohora range gate and shouted slogans.

KMSS adviser Akhil Gogoi told reporters, "If there is a need to develop tourist amenities in the park, why can the state government not spare a few crores? The decision of allowing a private firm to adopt the park is against the sentiments of the people."

Dispur will discuss the issue with the agitating organisations in a meeting at the Assam secretariat on Saturday evening.

The KMSS protest came a day after state tourism minister Chandan Brahma expressed unhappiness over the Centre's decision to include the national park under the Adopt a Heritage project. He said they had started the process to intimate their objection to the Centre.

Earlier, Assam Tourism Development Corporation Limited chairman Jayanta Malla Baruah had defended the project, saying private firms will be allowed to develop tourist amenities only in peripheral areas and not in the core areas.

The project plans to entrust heritage sites, monuments and other tourist sites to private/public sector companies and individuals for development of tourist amenities. In Assam, JTI, a private firm, has applied to adopt Kaziranga National Park, spread over Golaghat and Nagaon districts, and Kareng Ghar, Rangghar and Siva Doul in Sivasagar district.

Akhil said the BJP government at the Centre had already handed over several government and public sector organisations to private firms.

"The Centre has also taken other steps harmful for Assam like withdrawing the state's special status and tabling the Citizenship (Amendment) Bill, 2016, in Parliament. Now it is going to hand over Kaziranga National park, which is the pride of the state, to a private firm," he added.

Palash Changmai, general secretary of Asom Jatiyatabadi Yuba Chatra Parishad, another youth organisation opposing the project, said, "Under no circumstance should the state government allow private firms to adopt Kaziranga National Park or the historical monuments in Sivasagar. We oppose the project and will continue to do so."