The protesters held placards reading 'ST is our birthright', 'No ST No Rest' and 'BJP go back' 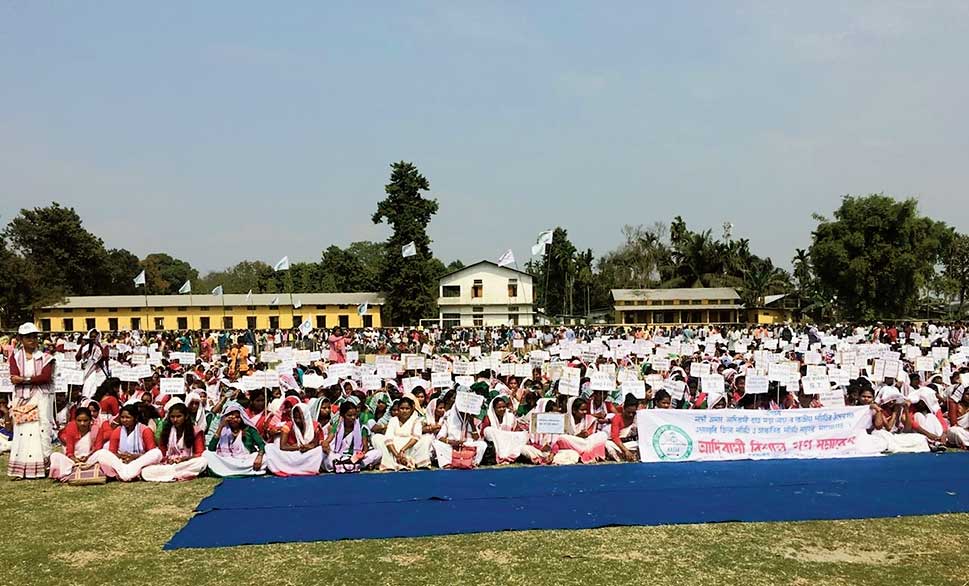 A massive gathering of more than one lakh people belonging to the Adivasi community, along with supporters of the All Adivasi Students’ Association of Assam (AASAA), on Sunday staged a demonstration at Tangla High School playground in Udalguri district to reiterate their demand for Scheduled Tribe status and warn the BJP-led government.

The protesters held placards reading “ST is our birthright”, “No ST No Rest” and “BJP go back”.

They also sought solutions to issues plaguing the community, including grant of Scheduled Tribe status, providing land pattas to the community and a hike in the daily wages of tea garden workers to Rs 350, among others.

The students’ association slammed both the central and state governments for “making false promises to the community before every elections” and reiterated that if the community is not granted Scheduled Tribe status before the 2021 Assembly polls, the 60 lakh Adivasis residing in Assam would withdraw support from the BJP.

It warned of a massive democratic protest if its demand is not fulfilled soon.

The gathering was attended by Adivasis from Baksa, Sonitpur, Biswanath and Chirang districts.

AKRSU supporters at the rally at Dimalgaon in Kokrajhar district.
Telegraph picture

“Why are the socio-politically backward Adivasis toiling in the tea gardens deprived of their constitutional rights? Why are BJP leaders postponing the issue by saying ‘dekhenge, karenge’ (We will look for it, we will do it)?” asked the president of the association, Pradeep Nag.

“Adivasis are contributing to the economic growth and development of Assam from the pre-Independence era. But today, if a survey is conducted, it is Adivasis who will be found to be the most backward, being deprived of basic amenities,” said Nag.

Nag also called to the legislators and parliamentarians of the community from Assam to raise their voice. “Grant us Scheduled Tribe status and we will make the green tea gardens greener,” he added.

The association’s vice-president, Rejen Horo, said, “The BJP cheated us, and we will cheat them in the polls by replying through EVMs.”

“Our ancestors and fellow sub-communities of Adivasis are enjoying Scheduled Tribe status in Bihar, Odisha, Chhattisgarh and Jharkhand but in Assam, neither the state nor the central governments are making genuine attempts,” said Laxman Porja of the Udalguri chapter of the association.

In Kokrajhar district, the All Koch Rajbongshi Students’ Union (AKRSU) on Sunday staged a mass gathering demonstration at Dimalgaon, demanding a separate state of Kamtapur, Scheduled Tribe status and constitutional safeguard for the community.

The Koch-Rajbongshi Sahitya Sabha, Koch-Rajbongshi Mahila Samiti and Chilarai Sena also participated in the event, which they termed as the “final and last warning’ to the government to resolve their issues.

AKRSU general secretary Jibesh Rai addressed the 8,000-plus gathering and said, “The people of the community must stand united to secure their rights. The government has no interest to resolve the issues plaguing the community.”

Adviser Hiteshwar Barman said, “Every political party has betrayed the Koch-Rajbongshis who have been exploited in their own land. It is high time the people of the community must join hands to vent their anguish against the government.”

Expressing dissatisfaction over the Bodo pact signed on January 27, Barman said, “We were not taken into confidence and kept in the dark.”

Former AKRSU president Biswajit Rai termed the BJP and the Congress as two faces of the same coin.

Joint general secretary Dibyajyoti Deka said, “We are not in need of false promises anymore, if the government doesn’t grant us ST status within three months, we will reply to them in the polls.”