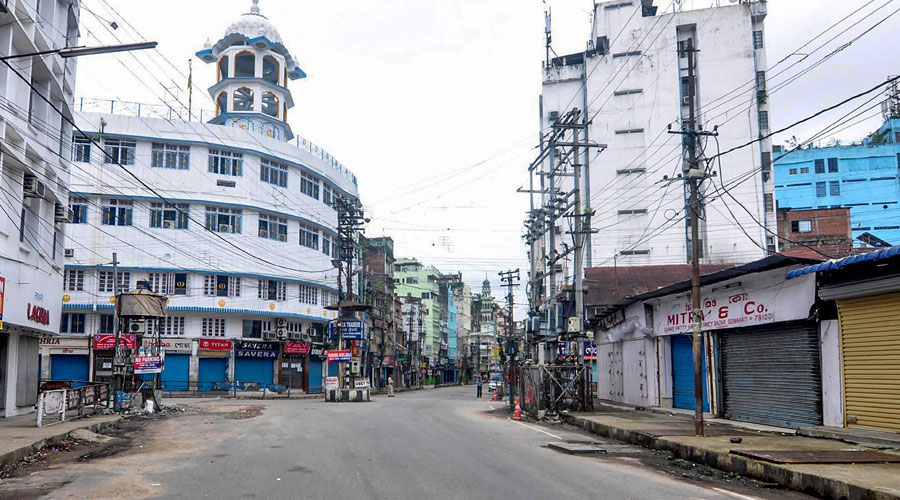 Fancy Bazar during the lockdown imposed by the Assam government to curb the spread of the coronavirus in Guwahati on Thursday
PTI
Umanand Jaiswal   |   Guwahati   |   Published 03.07.20, 02:48 AM

The apex students’ union of Assam on Thursday organised statewide protests against the government’s decision to speed up industrialisation by suspending the licence-permit regime for three years and easing land conversion.

“Our members burnt copies of the new land policy the government is pushing through an ordinance to boost the MSME sector. We are not against industrialisation or development. We are all for it but not at the cost of indigenous people.

“We are sure they will be affected if this blanket nod to land conversion is allowed,” All Assam Students’ Union (AASU) president Dipanka Nath said.

He sought the scrapping of any clause in the ordinance which makes the indigenous population vulnerable to the market and outsides forces. Nath also asked about  the status of the report submitted in January 2018 by the H.S. Brahma committee, which was formed to suggest measures to protect the land rights of the indigenous communities.

“Also, what happened to the report of the Clause 6 committee, constituted by the Union home ministry, which was submitted to the chief minister in February?” he asked.

AASU had spearheaded the Assam Movement (1979-1985) against unabated influx to the state, culminating in the signing of the Assam Accord which is yet to be implemented.

Clause 6 of the Accord provides for constitutional, legislative and administrative safeguards to protect, preserve and promote the cultural, social and linguistic identity and heritage of the Assamese people.

“It is unfortunate and reflects the true intention of the government which had ironically come to power with a promise to protect jati (community), mati (land) and bheti (home) of the indigenous people,” Nath said.

He said they will continue to protest till the government withdraws the “anti-indigenous” land policy from the ordinance.

Industries minister Chandra Mohan Patowary had on June 29, after a meeting of council of ministers, tweeted about the decision to facilitate the establishment of micro, small and medium enterprises in Assam through an ordinance which is yet to be notified.

“Now anyone will be able to set up industry in Assam just by submitting a self-declaration. No permission, clearance or licence will be required for three years. Land will also be deemed converted for industrial purposes. Such a bold and advantageous change is expected to accelerate the industrialisation process in Assam,” Patowary had said.

On easing the conversion of farmland for industry, Patowary said on Tuesday that apart from industrial estates and an industrial corridor, most existing units were on agricultural land.

Although industry has welcomed the government move to suspend the licence-permit regime for three years, the apparently blanket permission for converting any plot of land to set up industries has triggered apprehension and criticism.

The critics want clarity about the land-use policy, fearing that a blanket nod would lead to the indigenous people losing their land and, consequently, their identity in the long run.