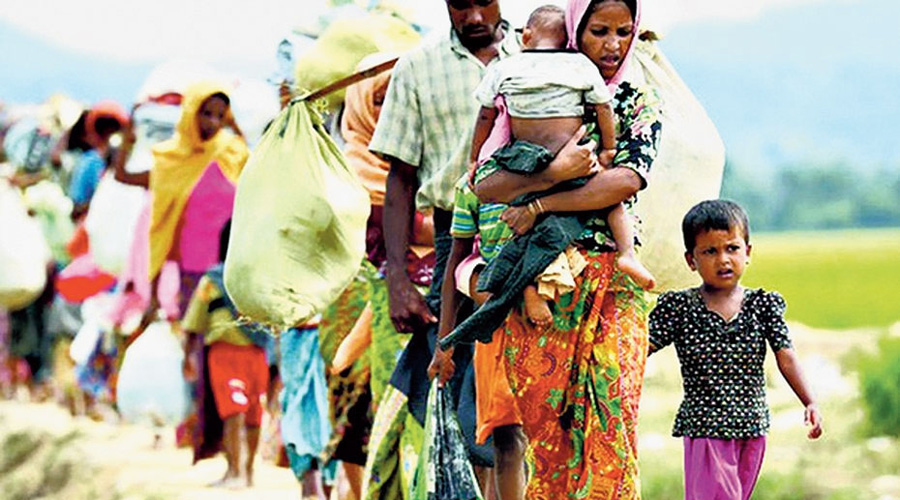 Sources said intensified vigil in the border areas have led to arrest of many Rohingya refugees since 2021, including Assam.
File photo
Umanand Jaiswal   |   Guwahati   |   Published 31.05.22, 01:19 AM

Cachar SP Ramandeep Kaur told The Telegraph that those detained had travelled from Jammu to Guwahati by train and from there to Silchar in three vehicles. The detained included 12 children.

“They were intercepted around 2am by our patrolling party in Silchar town. They are from Myanmar. Preliminary findings have revealed they belong to three families, were living in Jammu for many years and planning to enter Bangladesh. Somebody from Silchar was in touch with them. We are investigating the local link to know why they came here from Jammu and what is their plan,” she said.

They have been detained and will be sent to the detention centre in Silchar, a police source said.

Assam has 262-km border with Bangladesh of which Karimganj shares 92km and Cachar around 30km. The distance from Silchar town to the border in Katigorah is about 30km.

Two more groups of Rohingya refugees, minority Muslims from Myanmar, living in Jammu were arrested earlier — 24 from Tripura’s Unakoti district on May 2 and 13 from New Jalpaiguri police station in neighbouring West Bengal.

Both groups were planning to sneak into Bangladesh from Tripura which also shares border with the neighbouring country.

Most believe the BJP-led central government’s views that the illegal immigrants are a threat to national security besides its plan to deport them are seen as reasons for Rohingya refugees planning to enter Bangladesh. There are over 40,000 Rohingya Muslims living in India.

Sources said intensified vigil in the border areas have led to arrest of many Rohingya refugees since 2021, including Assam. Seventeen of them were arrested in two separate cases from Karimganj district since July 24.

They said the Bangladesh government has also expressed concern over Rohingyas entering the country from India. Last week, Dhaka had sent a formal note to

India to stop the entry of Rohingyas.

Making a strong pitch for early repatriation of the Rohingya refugees living in Bangladesh, Momen said since they were not being able to return to Myanmar they are taking to illegal activities out of frustration, something which could result in extremism that could affect the stability of the entire region.

Bangladesh at present shelters over 1.1 million Rohingya refugees, mostly from the Rakhine district of Myanmar. They fled to escape persecution in Buddhist-majority Myanmar, mostly since 2017. Myanmar sees them as illegal migrants despite them living in that country for generations.