Youth dies on the spot after trailer rams eatery 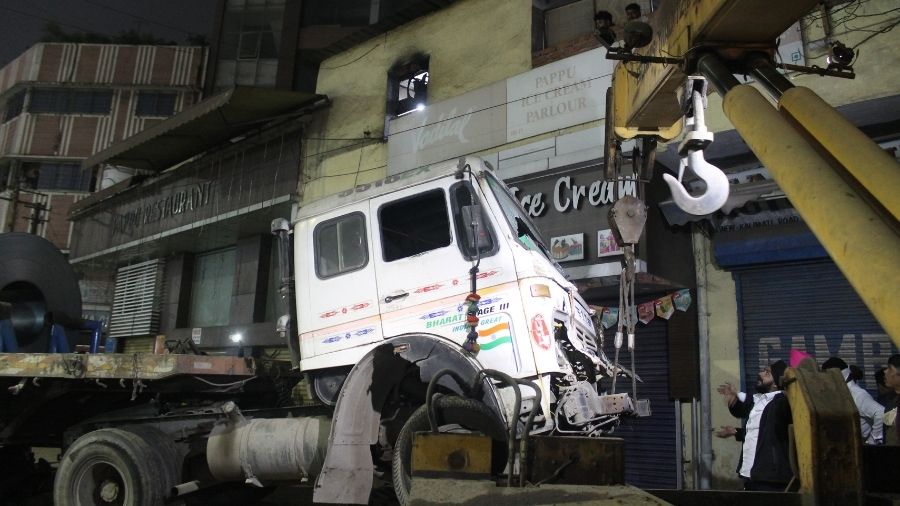 A crane is pressed in service for removing the loaded trailer from near the eatery on Kalimati Road in Sakchi, on Tuesday.
Picture by Bhola Prasad
Kumud Jenamani   |   Jamshdepur   |   Published 26.01.21, 07:52 PM

A 28-year-old man was killed on spot as a speeding trailer rammed into an eatery, near which he was standing, on Kalimati Road under Sakchi Thana area, on Monday at around 11 pm.

Five bikes were also damaged as the driver of the trailer, loaded with iron goods, lost control over his vehicle and rammed into the crowded Pappu Hotel, a popular food joint near the Sakchi Gurudwara.

The deceased youth, who is yet to be identified, waiting outside the restaurant for a parcel of food when the accident happened. His body was sent for postmortem by the police to the MGM Medical College Hospital mortuary.

“A 28-year-old youth was killed on impact by a speeding trailer that rammed into an eater along the Kalimati Road. The heavy vehicle also damaged five vehicles parked in front of the eatery,” Sakchi Police Station officer-in-charge Kunal Kumar told The Telegraph Online.

The driver of the truck immediately tried to flee the spot but the staff of the eatery as well as the customers got hold of him. The agitated crowd beat him up and partially destroyed his vehicle before the police intervened.

Kumar said they had subjected him to an alcohol test at the medical college.

“We had taken the driver into custody and subjected him to an alcohol test, but it was tested negative at the medical college hospital.  We are now looking into whether there was any mechanical failure in the trailer,” he said.

The driver has been arrested and his vehicle has been seized, while the damaged bikes have also been taken to the police station.

Social activist Putul Singh, whose son’s bike has been damaged in the accident, blamed the police for it. She demanded that the administration should mend the damaged vehicles themselves.