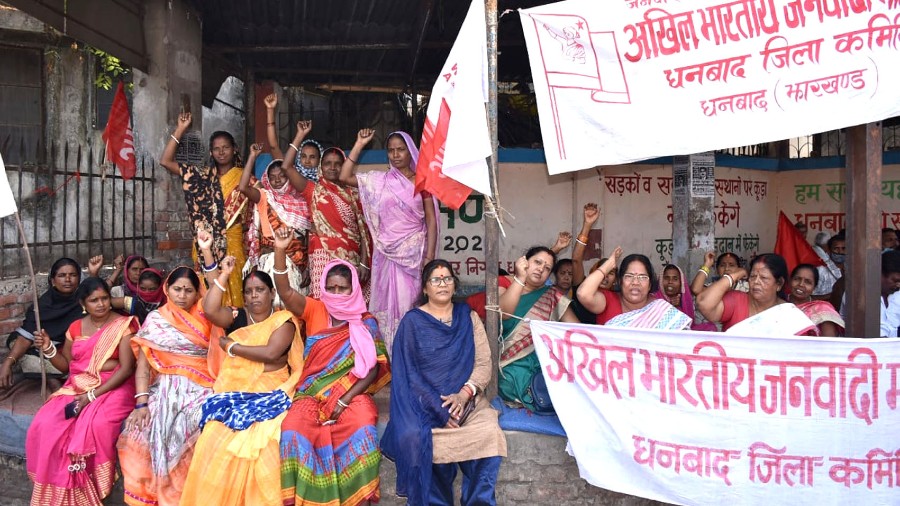 Over 50 women’s rights activists carried out demonstrations near the district headquarters of Dhanbad on Monday against the central government and terming it as anti-poor and anti-farmer and held it responsible for the increase in unemployment, inflation and crime against women.

The protestors also accused the government of befooling people by raising slogan on Beti Bachao Beti Padhao but not ensuring proper security for the girls and women who are going out of their houses to study in educational institutions or workplaces leading to crimes like rape, murder and harassment.

The demonstrators who congregated at the site at around 10 am and raised slogans like Kisan virodhi bill ko wapas lena hoga, kisan virodhi sarkar murdabad, etc. also accused the central government of coercing farmers protesting against the farm bills aimed at helping the corporate houses at the cost of farmers.

Talking to the media at the demonstration site, Upasi Mahtain, district president of All India Democratic Women Association (AIDWA) said, “The unemployment is at the highest level during the present government regime of the centre due to its anti-people policy.”

Attacking the government, Mahtain said, “The government opened schools for offering khichdi to the students but didn’t make provisions for the appointment of teachers as the primary work at the schools for imparting education.”

Another protestor, Chhavi Dhar who is also the district secretary of AIDWA said, “The government instead of coining proverbs like Beti Bachao Beti Padhao should ensure immediate punishment to perpetrators of offences like rape, dowry murder, female infanticide by carrying out a trial in fast track courts.”

The protestors further demanded the government to ensure immediate passage of women’s reservation bill and other demands including equal pay for women, strict implementation of 498A of Indian Penal Code (IPC) related to the harassment of women. The irate protestors also demanded provision of reservation for women in government jobs.

The demonstrators also termed petrol diesel price hike carried out by the central government as anti-people and demanded rollback of the various provisions of the recent budget presented by the government aimed at increasing inflation and unemployment.

They also accused the government of carrying out privatization of public sectors organizations, including the profit-making organizations like Indian Railway, banks, Life Insurance Corporation of India, etc.