Advertisement
Home / Jharkhand / ‘We’ve lost our ID cards and have no cash… where do we go?’

‘We’ve lost our ID cards and have no cash… where do we go?’

10 labourers from Latehar stranded at Chamoli share their ordeal, 21 missing from Jharkhand 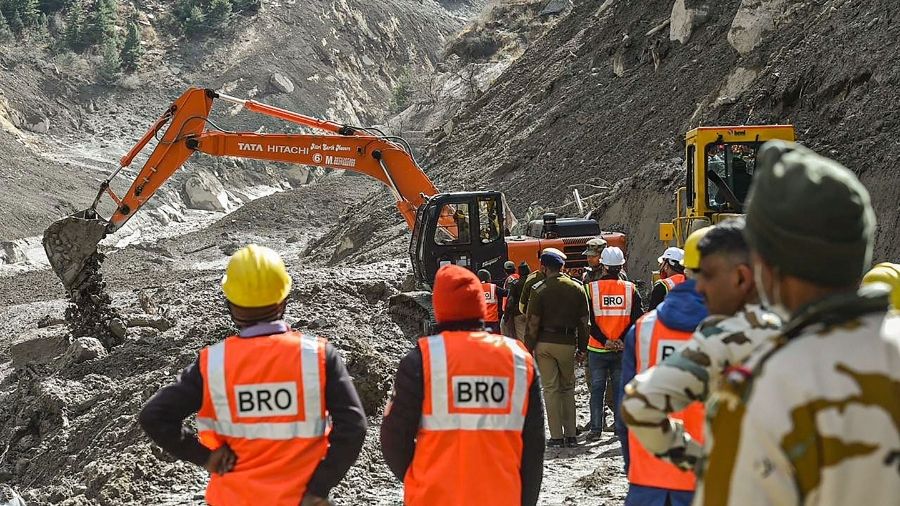 As per data gathered by the state helpline, as many as nine people were missing from Lohardaga, four from Ramgarh, seven from Jamtara and one from Bokaro, while 10 labourers from Latehar were stranded in Chamoli.
PTI
Saurav Roy   |   Ranchi   |   Published 09.02.21, 07:57 PM

At least 10 labourers from Jharkhand’s Latehar, who were working in a National Thermal Power Project (NTPC) site at avalanche-ravaged Chamoli district of Uttarakhand, are stranded in the area with no cash in hand and no document to prove their identity.

“All our government identity cards got washed away in the avalanche. We don’t even have Rs10 in our pocket. God only knows when and how we will manage to return home,” Rooplal Singh, one of the stranded labourers, originally from Bariatu village in Latehar, about 110km north west of capital Ranchi, told The Telegraph Online.

Santosh Singh, another stranded labourer staying with Rooplal in a temporary accommodation arranged by NTPC after Sunday’s disaster, said the company was providing food to the labourers, but they desperately wanted to return home and see their families after such a close encounter with death.

“There is no work left for us here, and we desperately need to return home. We do not have any document to prove our identity as all our valid identity cards got washed away in the incident,” said Santosh, also a resident of Bariatu village, from where several labourers move to other parts of the country to work as daily wagers every year.

On Tuesday, the number of missing Jharkhand labourers in Uttarakhand rose to 21 from Monday’s 15. Callers from Chamoli shared names of at least seven labourers from Jamtara and one from Bokaro, who were missing after the avalanche that triggered massive flooding alongside the Alaknanda and Dhauliganga rivers on Sunday morning.

As per data gathered by the state helpline, as many as nine people were missing from Lohardaga, four from Ramgarh, seven from Jamtara and one from Bokaro, while 10 labourers from Latehar were stranded in Chamoli.

Santosh and Rooplal fear that the loss of IDs may pose as a hurdle for them to avail of any relief from the government. Both of them, along with eight other residents of their village in Latehar, went to Uttarakhand on January 23. However, they have not gone to work since the incident and have not earned their daily wage.

“We want to return home and start afresh. Our families are entirely dependent on the daily wage we earn. We cannot afford to sit idle here with no income and wait for the government’s help, but there is no other option as we do not have enough cash to travel,” Rooplal said over phone from Chamoli.