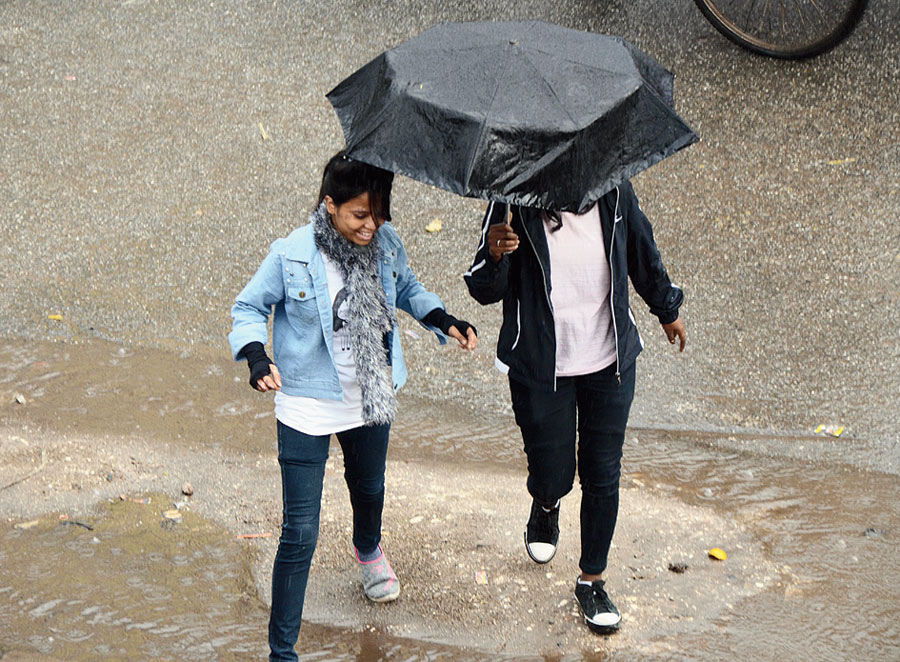 Puddles and umbrellas were back in Ranchi on Tuesday.
Picture by Manob Chowdhary
Our Special Correspondent   |   Jamshedpur   |   Published 03.03.20, 06:48 PM

Several places across the state including Ranchi and Jamshedpur witnessed thunderstorms , lightning and rain on Tuesday due to the impact of a cyclonic circulation triggered by a western disturbance passing through the northern parts of the country.

Ranchi experienced 13mm of rain while the local weather office in Jamshedpur recorded 3mm. The steel city along with several other places in southern and central Jharkhand witnessed lightning and sudden strong winds which blew at a speed of 40kmph.

A wall collapsed at Bagbera locality of the steel city, injuring a local resident whose condition was stated to be serious.

The illuminations at Jubilee Park on the first day of the three-day Founder's Day celebrations were turned off on Tuesday due to unfavourable weather condition.

According to him, light rain or thunderstorm is expected in isolated pockets, especially in the central, north-east and southern Jharkhand, till Saturday.

A senior weather analyst at the Patna Met Centre said the cyclonic circulation was hovering over Madhya Pradesh extending up to 1.5km above mean sea level and this was resulting in heavy moisture incursion into the atmosphere from the Bay of Bengal, which resulted in rise in humidity levels in most parts of Jharkhand.

Both the Patna and Ranchi Met centres have already issued alerts of hailstorm in isolated places on Thursday and Friday.