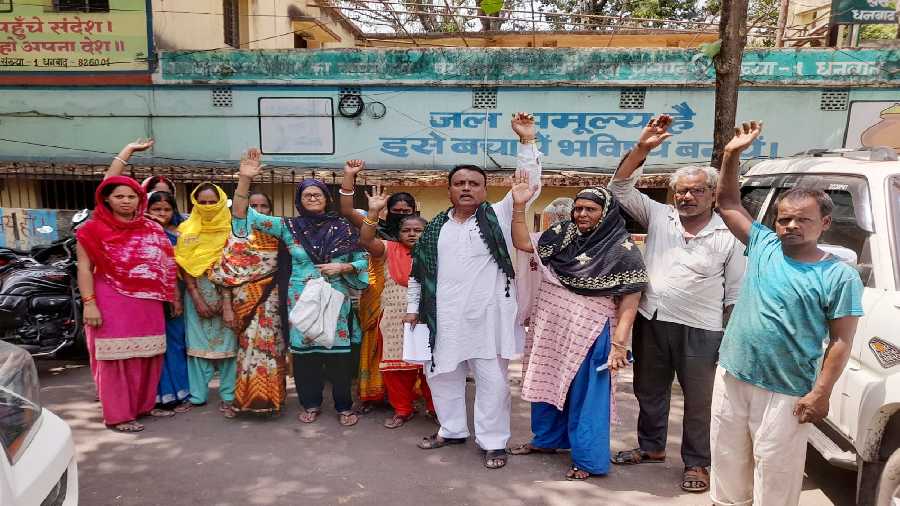 Deprived of drinking water for than a month, more than 100 women residents of different localities of Wasseypur in  Dhanbad including Lala Tola, Nabinagar, Madina nagar and Gulzar Bagh today staged massive demonstration at the office of Drinking Water and Sanitation Department at court road area of Dhanbad.

The protesters who were led by Nisar Ahmad former councilor of Ward Number 14 of Dhanbad also carried out gherao of office of Executive Engineer 1 of Drinking Water and Sanitation Department during which they shouted slogans against the district administration and charged them of neglect of long pending issue of water crisis even during the holy month of Ramzan.

The protesters later had a telephonic talk with Manish Kumar executive engineer of Range I of Drinking Water Sanitation Department who assured to address the problem within two days.

Talking to media at sidelines of protest, Nisar Alam said, “Though, residents of half of area of Wasseypur having a population of around 1 lakh are getting clean and safe drinking water but rest  half are deprived  of water for more than a month”

“Such is the situation in our area that people have to knock on the doors of the people of adjoining localities during Sehri and Iftar  during the month of Ramzan to meet their water requirements” said Alam.

“He assured to rectify the problem by tomorrow, failing which we will be compelled to intensify our agitation and even resort to carry out gherao of the office of Deputy Commissioner of Dhanbad” threatened Alam.

Roshan Ara, one of women protestors who participated in demonstration programme today said “the problem of womenfolk have been aggravated due to lack of water supply during the months of Ramzan and finding no solution we have been compelled to carry out demonstration here.”