Advertisement
Home / Jharkhand / Vidhan Sabha turns 20, but it has no leader of the Opposition
Leader of Opposition Marandi skips celebrations

Vidhan Sabha turns 20, but it has no leader of the Opposition 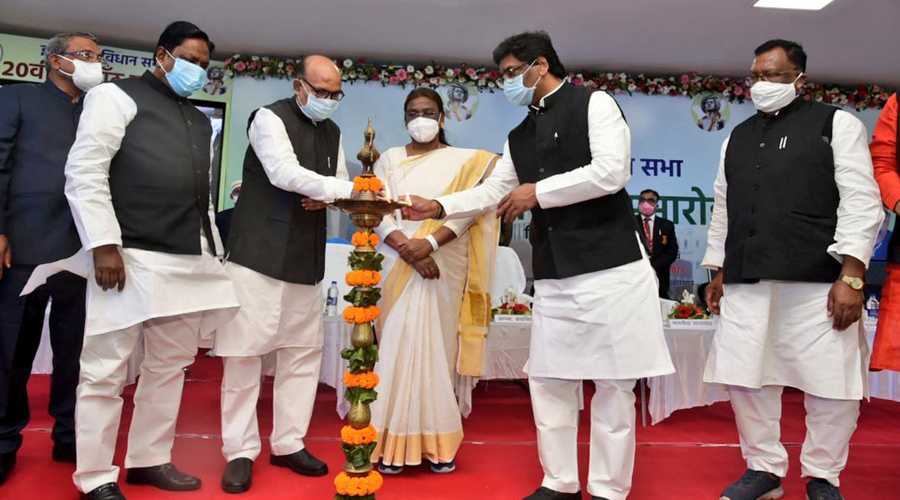 Chief minister Hemant Soren, Governor Draupadi Murmu and other dignitaries at the inauguration of the 20th anniversary celebrations of the Jharkhand Vidhan Sabha in Ranchi on Sunday
Twitter/@HemantSorenJMM
Our Correspondent   |   Ranchi   |   Published 22.11.20, 05:13 PM

For the first time since the formation of Jharkhand, the anniversary celebration of Vidhan Sabha was held in absence of a leader of the Opposition on Sunday, triggering indirect jibes against the government from the BJP.

Biranchi Narayan, the chief whip of BJP, the second largest party in the 81-member Jharkhand Assembly, used the platform of the 20th anniversary ceremony of Vidhan Sabha to lament over the absence of BJP-backed Leader of Opposition Babulal Marandi, the first chief minister of Jharkhand.

“It would have been nice had Leader of Opposition, Babulal Marandi, attended this event. Leader of Opposition is one of the pillars of the Assembly and Babulalji’s absence gives a sense of incompleteness as we celebrate 20 years of our state assembly,” Narayan said, while addressing all the MLAs and Governor Droupadi Murmu at the Vidhan Sabha anniversary celebration.

Babulal and two of his former Jharkhand Vikas Morcha-Prajatantrik (JVM-P) MLAs – Pradeep Yadav and Bandhu Tirkey – are yet to get the assembly speaker Rabindra Nath Mahato’s nod as MLAs of parties they joined after winning the 2019 elections as JVM-P candidates. While Babulal joined BJP, Yadav and Tirkey moved to the Congress party. However, the Election Commission of India (ECI) have accepted them as MLAs of the parties they joined after winning the elections.

Chief Minister Hemant Soren, alluding to the Narendra Modi-led Union government, said that making stricter laws and imposing them on the citizens with an iron fist may not lead to positive changes in the society.

“Imposing stricter laws on the people cannot lead to a better society. We have to create a society, wherein people respect each other irrespective of caste, community, gender and religion. Unity in diversity is the beauty of our country, and we all should stay united in order to see progress and development,” said Hemant, stating the example of the Vidhan Sabha, where every MLA was equal, he added.

The chief minister also thanked his fellow MLAs for fighting the Covid-19 crisis as a team and helping Jharkhand check the spread of the deadly virus. Hemant said that the Covid-19 situation in Jharkhand was better in comparison to many other states in India, but the fight was not over yet.

“Our fight against this pandemic is not over yet. I would urge all the residents of our state to abide by the rules and take necessary precautions, as that is the only way we can deal with the situation,” said Hemant.

Assembly speaker Rabindra Nath Mahto conferred the best MLA award to seven-time legislator from Shikaripara, Nalin Soren, a senior JMM leader. Mahto lauded the efforts of the coronavirus-infected MLAs to stay connected with the Assembly via video conferencing even when they were battling the infection.

Addressing the ceremony, Governor Droupadi Murmu remembered the brave tribal heroes of Jharkhand, Birsa Munda and Nilamber Pitamber. She said that Jharkhand should not only count its success, but also pay attention to the shortcomings.

“In this time of globalisation, we must continuously strive to stay at par with the world. The people elect their representatives with a lot of hope and aspirations. All the MLAs must remember that their primary task is to serve the people and address their problems,” said Murmu.