The coal and mines minister is tasked with helping the CIL deliver an additional 200,000 tonnes of coal every day through 60 rakes 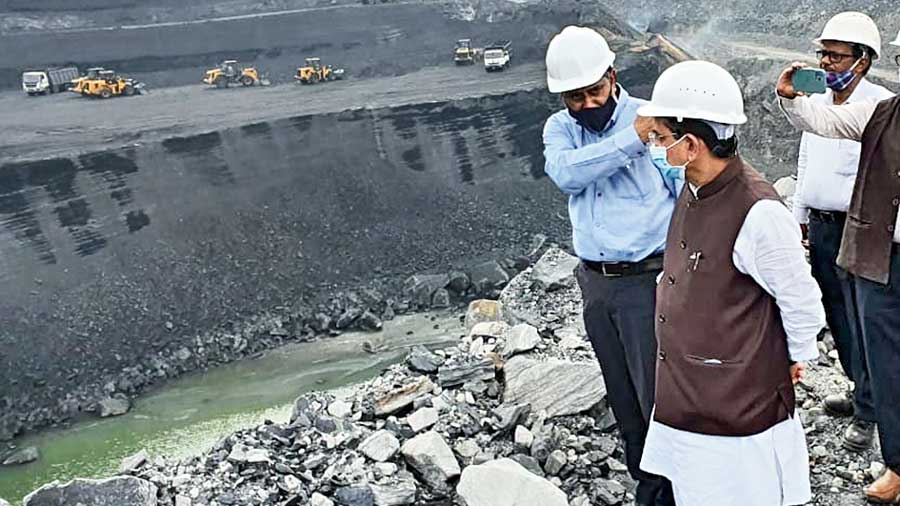 Union coal and mines minister Pralhad Joshi visited Jharkhand on Thursday amid a power crisis in the country due to shortage of coal and a directive to increase coal production.

Joshi landed in Ranchi at around 10.30am and travelled by road to inspect the Ashoka open cast mines of the Central Coalfields Limited (a subsidiary of Coal India Limited) in Piparwar area of Chatra district. In the evening, the minister reviewed the performances of CCL and Bharat Coking Coal Ltd (also a CIL subsidiary) at the CCL headquarters in Ranchi.

“We are aware of the coal crisis. At the moment our mandate is to ensure that maximum coal is supplied to the power plants of the country. I would like to assure that no problem will come in the way of supply of coal to power plants,” Joshi said after the review meeting.

Later in the evening, the minister tweeted: “Reviewed coal production and off-take of CCL Ranchi and BCCL officials. Coal companies are making all-out efforts to scale up production and dispatch. Motivated employees to rise to the occasion and give their best to assure coal supply as per demand.”

Reviewed coal production & offtake of @CCLRanchi & @BCCLofficial today in Ranchi, Jharkhand. Coal companies are making all-out efforts to scale up production & dispatch. Motivated employees to rise to the occasion & give their best to assure coal supply as per demand. pic.twitter.com/ll3xSDbEjZ

Joshi added: “Visited Bachra Railway siding in the CCL Ranchi where a rake is being loaded for dispatching coal to thermal power stations. Emphasised on loading proper quality and quantity of coal onto the railway wagons.”

The minister is also learnt to have told officials during his visit to the Ashoka open cast mines to load proper-sized coal on rakes.

“Visited Ashoka OCP of CCL Ranchi. With a peak rated capacity of 20 MTPA, it is one of the larger coal projects in CCL. Interacted with on-ground team and motivated them to increase productions and off-take from the mine,” Joshi had tweeted in the afternoon.

Joshi had on Wednesday reviewed the performance of South Eastern Coalfields Limited’s (SECL) Gerva mine (Asia’s largest open cast mine) in Chhattisgarh before his visit to Jharkhand on Thursday.

The minister is tasked with helping the CIL deliver an additional 200,000 tonnes of coal every day through 60 rakes. While the CIL’s annual production target is 670MT for the current financial year, off-take (amount of coal supplied from pitheads) is expected to be 740MT.

Joshi said in a tweet on Wednesday: “Happy to share that cumulative coal supplies to thermal power plants from all sources including @CoalIndiaHQ recorded more than 2 million tonnes yesterday...”

Happy to share that cumulative coal supplies to thermal power plants from all sources including @CoalIndiaHQ recorded more than 2 million tonnes yesterday. We are increasing coal dispatch to power plants further to ensure sufficient coal stocks at power plants.

Apart from a sharp spike in electricity demand, growth in the number of consumers, inadequate stocking by power projects before monsoon, and heavy rains in September also hit coal production and dispatch, according to officials. In addition, lower generation from other fuel sources and non-payment of coal dues also contributed towards inadequate supplies, they said.