Hailing from the Yadav community, the Koderma MP lauds the present govt for being 'all inclusive' 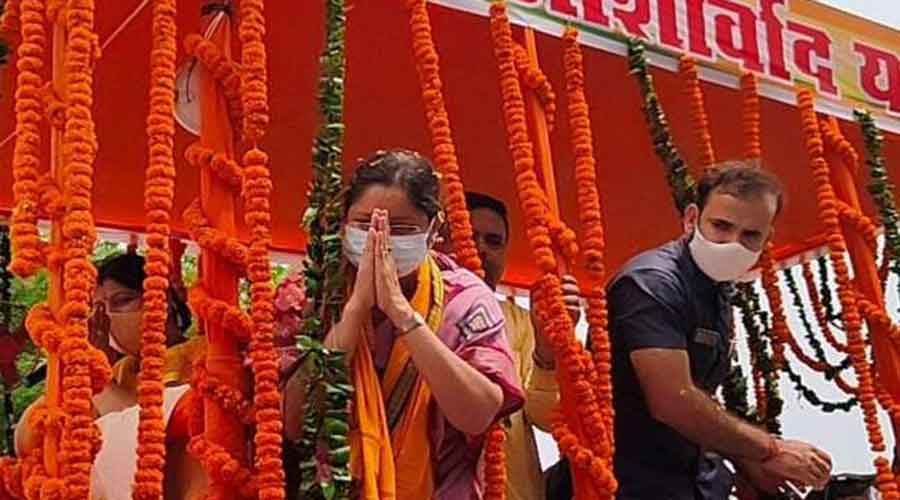 Annapurna Devi, union minister of state for education, while addressing a gathering in Koderma and Barhi during Jan Ashirwad Yatra said current expansion of the Modi government is all inclusive due to proper representation in the present cabinet of ministers.

The event was organised by the BJP to welcome her for her maiden visit to the state after becoming a union minister. The yatra will pass through different districts of the state.

Devi said Prime Minister Narenda Modi has given place to youths and women in the cabinet with the aim to give a voice to downtrodden community of the society.

“Even by inducting me, he gave respect to a woman and for the first time, Koderma got its representation in the union cabinet,” she said.

She said despite Opposition disturbance in the parliament, twenty bills were passed which will benefit people.

“In medical entrance examination, government has given 27 per cent reservation to OBC, which will give opportunity to 5500 students of this section to become doctors,” she said. Her yatra reached Hazaribagh town on Monday evening where it got a grand welcome.

Annapurna reached Koderma on Sunday by Delhi-Bhuvneshwar Rajdhani express where BJP leaders gathered in large numbers and welcomed her. This yatra will end on August 19 and pass through Hazaribagh, Ramgarh, Ranchi, Dhanbad, Bokaro and Giridih where OBC are in sizeable numbers.

Sources in the BJP said the way Annapurna was welcomed in the state has send signals about her growing stature in the party. They said even when veteran leader and tribal face of the state Arjun Munda became a cabinet minister in the Modi government, no such welcome was given to him.

However, the Oopposition blamed BJP for playing the OBC card in Annapurna’s name.

According to party insiders, Annapurna is not only a face of OBC coming from Yadav community but also a woman which the party wants to use in upcoming elections. However a senior party leader of the state set aside all such claims and said they only want to thank Modi for passing the OBC bill as well as inducting Annapurna in his ministry.