Two workers trapped in flooded coal mine in Nirsa 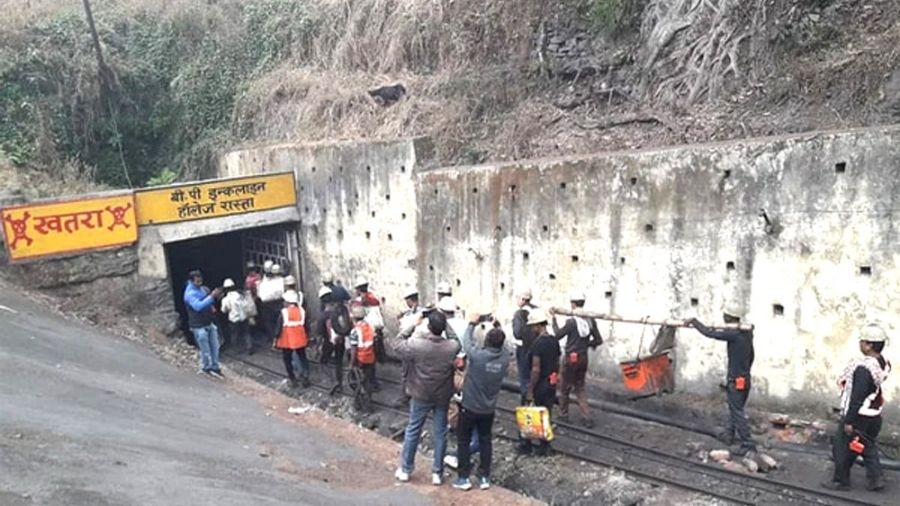 Rescue operations on at Khudia colliery at Mugma in Nirsa block of Dhanbad on Tuesday.
Picture by Gautam Dey
Our Correspondent   |   Dhanbad   |   Published 08.12.20, 06:09 PM

Efforts are on to rescue two miners trapped inside an underground colliery after a borehole burst triggered flooding at the Mugma area of Eastern Coalfields in the wee hours of Tuesday.

Teams from Khudia colliery and ECL’s Mugma area and Sanctoria headquarters in Asansol are working together, trying to pump out water from the underground colliery.

Nirsa SDPO Bijay Kumar Kushwaha (in uniform) and other officials at the accident site at Mugma in Dhanbad on Tuesday.
Picture by Shabbir Husain

Former Nirsa MLA Arup Chatterjee, who was at the site, said mining operations at the site were launched two days ago. “The colliery was lying closed since November 27 when there was a similar inundation. But no one was injured then,” he said.

Chatterjee said a sudden burst in the borehole led to water flowing into the mine from an adjoining colliery leading to flooding around 3.30am. And although two other workers managed to escape, Maji and Bauri got trapped inside.

“There is no record of a borehole in the mine survey record. Nor is it mentioned the mine map study carried out before the relaunch of mining activity in the colliery,” the former MLA revealed and wondered how the accident occurred.

Chatterjee said even though rescue efforts were on, he would request the district administration and Eastern Coalfields to ensure the operation was speeded up so that the two miners could be rescued as soon as possible.

Nirsa MLA Aparna Sengupta blamed the ECL management for being negligent about safety concerns. “We have been raising the issue of lack of safety gear, including boots, for the colliery workers. But the management did not respond,” she said.

Nirsa circle officer M.N. Mansoori said he went to the site at 4am after receiving information about the inundation in the mine from Eastern Coalfields. “Four workers were underground when the incident took place. Of them, Samir Tuddu and Vikash Bhuian, somehow escaped unhurt,” he said.

Mansoori said apart from the ECL rescue teams, another group of 25 workers had been engaged to drain out water from the mine. “Talks are on with NDRF to deploy a team of theirs to add to the efforts,” he said.