In another incident, a man was accidentally shot in Tilaiya Dam from the service revolver of a trainee deputy superintendent of police 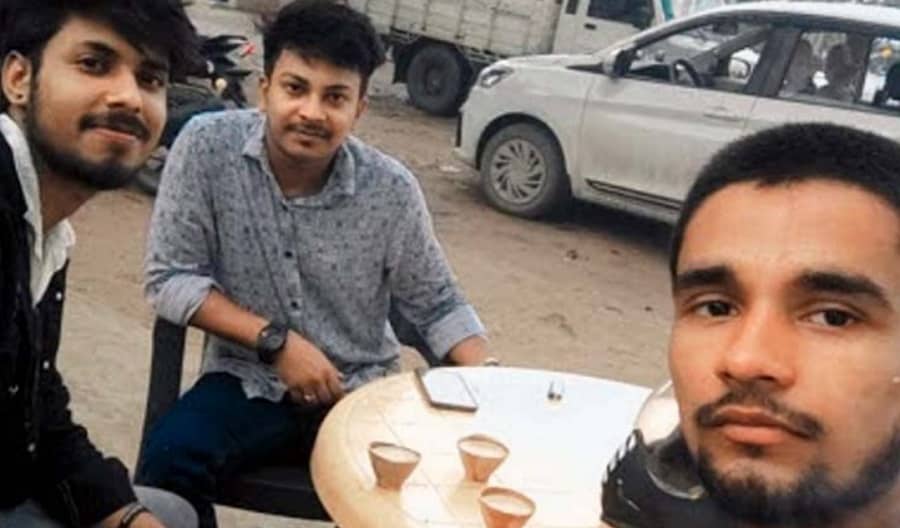 The trio enjoying at a restaurant in Tilaiya hours before the mishap at Vrindaha waterfall.
Sourced by the correspondent
Vishvendu Jaipuriar   |   Koderma   |   Published 10.07.21, 01:11 PM

Three college friends from Bihar who came to enjoy the famous Vrindaha waterfall in Jarga panchayat under Tilaiya police station of Koderma district met with a tragic accident as two of them drowned on Friday. The third one was saved by local villagers. A police team reached there shortly after the incident but failed to recover the duo's dead bodies as the search operation was called off owing to dusk.

Sources said the trio, namely Karthik Kumar (19) and Sunny Raj (20) of Patna and Siddharth Kumar of Nawada decided to go for a vacation. Sunny studies in a college at Patna and suggested Kakolat waterfall as it was in his hometown Nawada.The trio reached there on Friday but were stopped by the police as the fall becomes risky during monsoon.

They then searched on google and came to know about Vrindaha waterfall which is known as Kashmir of Koderma. They reached Koderma at 11 in the morning and had their breakfast at a restaurant before heading towards the fall.

After reaching the place, the friends went close to the 100feet high fall. Suddenly, Karthik slipped and fell into the deep water. Siddharth and Sunny jumped in the water to save their friend but all three of them started drowning. The villagers ran to their rescue, managing to save Sunny but the other two drowned.

"We came in contact of each other through PubG. Karthik was fond of traveling and he put together the plan to visit any tourist spot. Two days ago too, we planned to come to Kakolat but we failed to wake up early," Sunny said at the Tilaiya police station, crying inconsolably.

Officer-in-charge of Tilaiya police station, Dwarika Ram said, "Local divers had been hired to find the bodies but operation had to be called off as it was getting dark. We will again search for the bodies tomorrow." adding that the parents of the boys have informed.

In another incident. a man died after being accidentally shot from his friend's service revolver on Friday.

Three friends including a trainee deputy superintendent of police (DSP) Ashutosh Kumar went to the popular Tilaiya dam for picnic. Sources said that Ashutosh is undergoing training for DSP in Buxar of Bihar. It appeared that while showing his service revolver to his friends, Ashutosh accidentally fired the gun and the bullet hit one of his friends Nikhil Kumar's right chest. Ashutosh and his other friend Siddharth Kumar immedietly put injured Nikhil in the car to take him to the hospital but Nikhil succumbed to his injuries in the car. Ashutosh tried to cover up the matter but the senior officials of Koderma sent a police team which brought the body to Koderma sadar hospital.

Koderma deputy superintendent of police (headquarter) Sanjeev Kumar confirmed the incident and said a probe has been initiated.

Nikhil's brother Vineet Sinha rejected the story of accidental firing and claimed that his brother was killed over some dispute and demanded justice.

Police officials said DSP Ashutosh and Siddharth were arrested and are being interrogated. "We will solve the case soon, we're waiting for the postmortem report," he said.