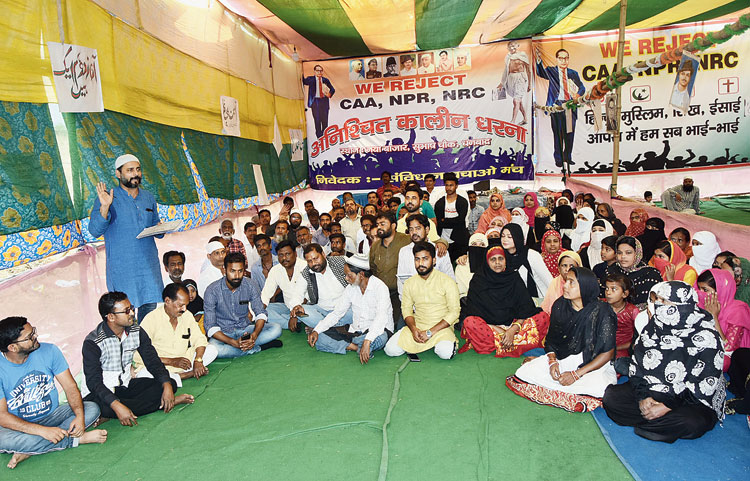 Participants at the indefinite sit-ins against the new citizenship matrix at Naya Bazar and Wasseypur on Wednesday decided to suspend their protest for two days during Holi on March 9 and 10 and during Ram Navami on April 2, but refused to withdraw the dharna completely.

The decision to suspend the protest on Holi and Ram Navami was taken jointly by those taking part in both the dharnas at a meeting held in Naya Bazar.

The participants also decided to put up a first-aid facility and a sherbet distribution counter at both the sites during Holi. A banner with “Holi ki hardik subhkamnayein” written on it will also be put up at the dharna sites.

The decision to temporarily suspend the protest follows the instruction by the district administration and police at a meeting held under the chairmanship of Dhanbad subdivisional officer (SDO) Raj Maheshwaram at Bank Mor police station on March 3.

Talking to The Telegraph, Haji Zamir Arif, a social worker of Wasseypur and one of the protesters, said: “Holi is not the festival of Hindus alone. Everyone in this country celebrates it. In order to maintain the spirit and fervour of the festival, we have decided to suspend our dharna for two days during Holi. But around five-six participants will be present at each site to protect and tents, carpets and blankets. They will also offer first-aid facility and sherbet to Holi revellers.”

Arif said the agitators had also decided not to use any loudspeakers during the three special days.

“But there is no plan to completely withdraw the dharna as it is our democratic right to protest against the Citizenship (Amendment) Act (CAA), which we feel is discriminatory in nature,” he said.

The district administration had on March 3 held a meeting with the participants of the sit-ins at Wasseypur and Naya Bazar against the CAA, National Register of Citizens and National Population Register underway since January 2 and January 27, respectively .

At the meeting, the SDO had asked the agitators to withdraw their dharna in view of upcoming Holi festival.