Semi-nude protesters took on the BSL management with their demand for jobs, while Vedanta’s ESL’s expansion plan despite getting clearance during the public hearing, witnessed stiff opposition 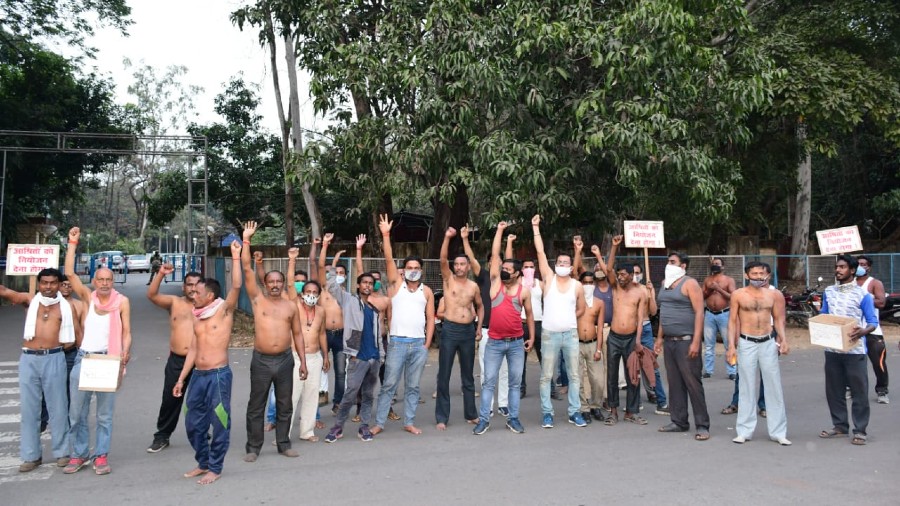 Semi-nude youth took on a unique way of registering their protest. The demonstrators, armed with shoe brushes resorted to polishing the shoes of Bokaro Steel Plant’s (BSL) employees. Raising anti-BSL slogans, bare-chested, they stood outside BSL’s headquarter, on Wednesday evening. They raised anti-slogans standing outside the gate of BSL’s headquarter in a semi-nude state and as the employees came out they started polishing their shoes.

The protestors, all dependants of BSL’s deceased employees, have been demanding compensatory jobs from the company’s managing authorities. To get heard, this year, they have organized several protests to highlight their demands.

They even stood in chest-deep water for hours in this cold to make those in authority pay heed to their demands. “We have reached a position where we have no option but to beg or polish shoes for our survival. If BSL does not provide us with a job, that they had themselves promised to give us, only to later backtrack, we don’t have many options left,” said Rajesh Gupta a protestor.

Another protester, Parmeshwar Kumar said, “We have been campaigning with our demand for the past one year but nothing positive has been announced by the BSL management. They are unable to feel the pain of the dependants of their employees who died serving the plant.”

In a bid to get heard, they have threatened to intensify their protest, to get them heard.

Meanwhile, in Bokaro’s Chandankyari block, a public hearing was organized to bag environmental clearance for the expansion of Vedanta’s Group, ESL at Siyaljori. However, former revenue minister and Chandankyari MLA, Amar Bauri along with JMM leader, Mantu Yadav and others, registered stiff opposition against it, on Wednesday.

The public hearing jointly conducted by Jharkhand State Pollution Board (JSPCB) and district administration, assessed the environmental impact and its repercussion of the proposed expansion plan of ESL, which includes 3 MTPA steel plants from existing 1.5 MTPA. According to sources, the facility is all set to be installed close to the existing steel unit in Chandankyari Block of the district.

The hearing was conducted in the presence of villagers residing close to the steel facility. CEO of Chas Municipal Corporation (CMC), who chaired the public hearing, Shashi Prakash Jha, maintained that the hearing was successful and that the villagers gave their consent but, with a condition that the company would conduct plantation drives to control the pollution level of air and water, build good roads and also provide employment to land losers and others residents.” Chief of communication, ESL, Shilpi Shukla said, “ESL expansion plan, commits overall 70 percent employment to the local community. The public hearing was successfully concluded at the plant premises.”