Tribals not to give land for DVC's coal mining 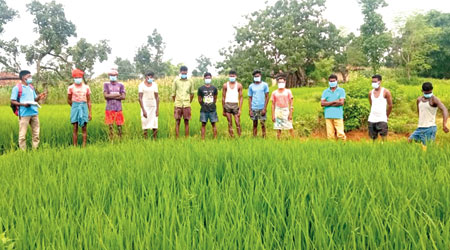 Tribals stand in the field in Tubed which will be acquired for the DVC coal mining project at Latehar.
Bhola Prasad
Animesh Bisoee   |   Jamshedpur   |   Published 06.10.21, 12:04 AM

Tribal residents of several villages in Latehar facing displacement due to the Damodar Valley Corporation’s 6MTPA coal mining project have given the call of na jaan denge, na zamin denge (will not give life, nor give land).

Several tribal outfits namely Adihak Bhumi Raksha Morcha, Adivasi Sena, Jharkhand Rajya Visthapith Punarvasith Jan Aayog and Jharkhand Bachao Andolan have jumped into the fray in support of the villagers, who are adamant about not parting with their lands for the project.

“It is a conspiracy of the PSU DVC to displace the tribals from their ancestral land. We have compiled the list of villages that were acquired by the DVC for their projects but are yet to clear compensation to the affected villagers.

“Now they want to do the same in this Oraon dominated area as part of the Central government agenda to wipe out the tribal identity of the local people. We will not let it happen,” said Harendra Oraon, a native of Tubed village which is one of the villages to be acquired for the project.

The tribal outfits will be going to the villagers listed for acquisition for the coal mining project of the DVC on October 9.

“We will be meeting the villagers and chalk out future course of agitation taking them into confidence on October 9. While on October 11 we will be meeting JMM senior leader and MLA Stephen Marandi who chairs the Assembly committee formed to probe into tribal land transfers illegally and apprise him about the apprehension of the tribals. 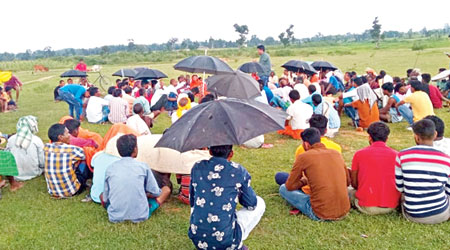 “We might also stage series of agitation in Ranchi and Latehar against the acquisition of land for the project,” said Adivasi Sena president Ajay Kachyap.

In the first phase, as many as six villages will be affected by this project from which 6 million tonnes of coal is expected every year for 30 years.

“Around 7,000 people belonging to the Oraon tribe will get affected. Apart from this, 750 villages will be affected by different other plans under the coal mining project in different stages which includes diversion of course of the Sukri river, constructing 20 feet roads and laying railway tracks for the project,” said Vasvi Kiro, a tribal activist and former member of State Commission for Women and member of the Jharkhand Rajya Visthapith Punarvasith Jan Aayog.

Significantly, DVC obtained environmental clearance from the ministry of the forest environment and climate change for the Tubaid Coal  Mine Project in April 2020 and have offered revised rates of compensation to lure villagers.

“In addition, offers were made for shifting allowance, house in R&R colony and absorption of the local workforce in the project. But some vested interest people are creating a disturbance,” said a senior DVC official associated with the project.

Chief engineer, DVC Latehar, Subir Mukherjee, however, exuded confidence about the fate of the project.

“We will settle all contentious issues amicably with the people and the project will kick-start soon,” said Mukherjee.

As per coal block allotment data, the project is spread in 460 hectares which comprises 230 hectares of agriculture land, 162.4 hectares of forestland, 39 hectares of wasteland, 22 hectares of surface waterbodies and settlements spread over 1 hectare.