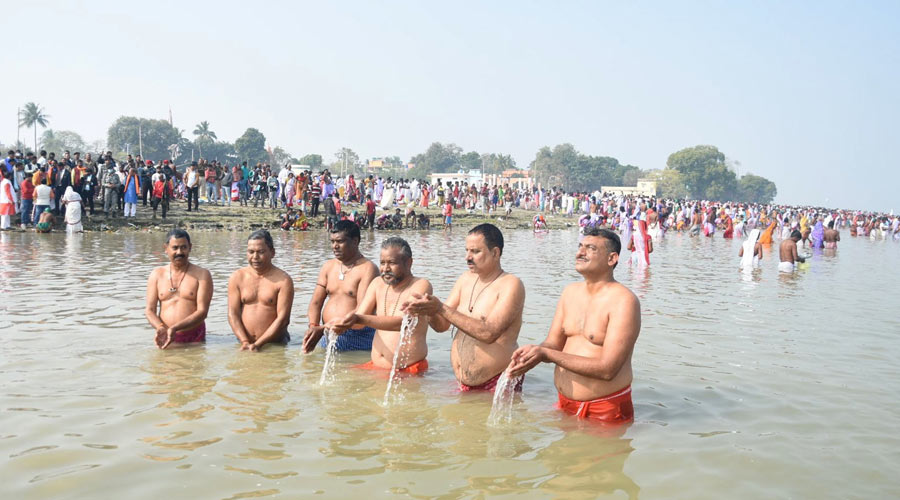 Former Chief Minister, Jharkhand and Leader opposition, Babulal Marandi (3rd from right in pix 1 and 2) along with others perform rituals and prayers after taking a holy dip at the bank of Ganga River in Rajmahal on the occasion of Maghi Purnima onn Wednesday.
Picture By: - Gautam Dey
Praduman Choubey   |   Dhanbad   |   Published 16.02.22, 09:40 PM

The three-day tribal festival of Maghi Purnima celebration began on Wednesday in the Sahibganj district with a large number of devotees taking a holy dip in the river Ganga and performing prayers and havan in the adjoining Mukteshwardham temple.

Former chief minister, Babulal Marandi who also reached Sahibganj on Wednesday along with other BJP leaders participated in the festival by taking a holy dip in the river and later performing puja at the adjoining Lord Shiva temple, seeking prosperity for the state, nation and humanity.

The devotees also donate to underprivileged people after performing puja and participate in havan which is being performed continuously since Basant Panchami or Saraswati Puja, on February 5.

Though every year a grand fair is also organised on the bank of river Ganga where all kinds of playing equipment like swings, sliders are installed this year due to Covid restrictions the permission for organising was not there but several stalls dealing in earthen pots and bamboo made article have been put on the river bank by local artisans.

The district administration has also made elaborate arrangements for the puja by deputing a large number of police forces and magistrates at different places of the district, including Suryadeo ghat, Balu plot, sub-divisional officer’s office ground, railway station and railway ground.

Bholanath Pandey, the chief priest performing puja on the bank of river Ganga in Sahibganj said, "The full moon or Purnima started this morning at around 9.40 am and will conclude at around 8 pm.”