To thwart the protests, as many as eight drop gates were erected on the road leading to Raghubar Das’s official residence 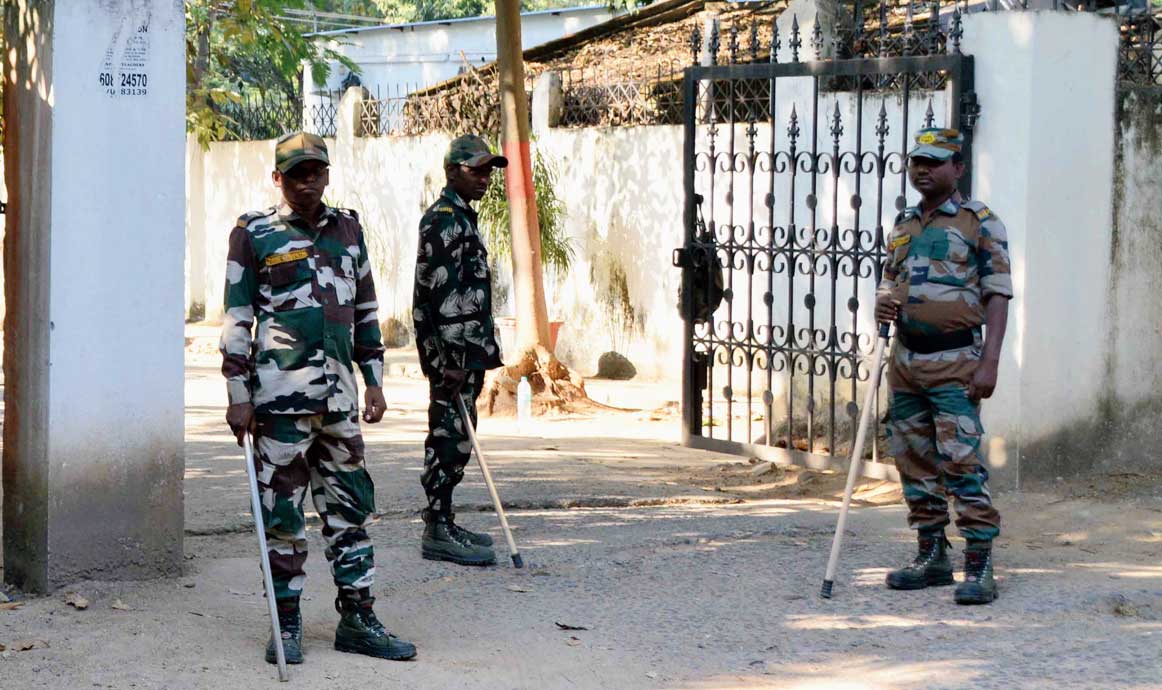 The capital made elaborate security arrangements on Sunday in the wake of a siege to the CM’s residence announced by the disgruntled army of para-teachers in the state, but no agitation was witnessed anywhere in the city.

Around 40km away in Bundu, 400 para-teachers though staged a sit-in outside the residence of Tamar MLA and Ajsu Party leader Vikas Munda.

In Jamshedpur too, para-teachers held demonstrations outside the residence of cabinet minister and Jamshedpur West MLA Saryu Roy. In Dhanbad, more than 50 staged a dharna outside the Dhansar residence of MP P.N. Singh and Saraidhela home of MLA Raj Sinha.

The Ekikrit Para-Shikshak Sangh, representing 67,000 para-teachers across 24 districts of Jharkhand, had decided on a ghera-dalo-dera-dalo agitation at the CM’s residence on Kanke Road, besides those of MLAs and MPs, to press for their long-standing demands including include regularisation of services and better pay.

To thwart the protests, as many as eight drop gates were erected on the road leading to Raghubar Das’s official residence. Security was also enhanced at the nearby residence of Assembly Speaker Dinesh Oraon. Extra cover was provided to the homes of Ranchi MP Ram Tahal Choudhary and MLA C.P. Singh.

The district administration deputed 40 magistrates and an equal number of senior police officers, besides around 1,000 jawan, to foil any attempt by para-teachers to lay siege to the residences of VIPs. A quick response team of Ranchi police was also kept on standby.

“Deployment has been made at strategic locations and drop gates erected. So far, we have not received any report of a demonstration. Security has been beefed up near educational institutions, marketplaces, bus stands and railway stations,” said Ranchi SSP Anish Gupta.

Khunti MP and veteran BJP leader Karia Munda, however, extended his full support to para-teachers, keeping the tempo of conciliatory gestures up since state BJP president Laxman Gilua on Saturday said their paltry monthly honorarium should be revised.

In an interview to a local news channel, the Khunti MP echoed Gilua. “At a time when the cost of living has increased manifold, it is very difficult to survive on such low salaries,” he said.

Tamar MLA Vikas Munda remained sceptical of the protests. “Around 1pm (on Sunday), some para-teachers came to my residence and they are holding peaceful demonstration since. I have full sympathy for them and don’t say their demands are unfair. All I say is children (students of primary and middle schools) should not be made to suffer (because of their indefinite strike),” the leader said.