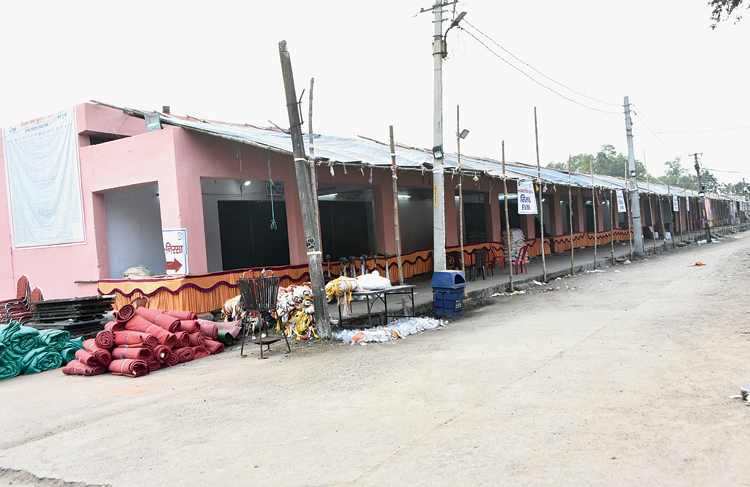 The market complex of Barwadda in Dhanbad on Tuesday where the strongrooms will be set up.
Picture by Gautam Dey
Praduman Choubey   |   Dhanbad   |   Published 17.12.19, 06:41 PM

Angry at the district administration for taking over the Agriculture Produce Market Complex at Barwaddah as a strongroom to store EVMs, dozens of wholesale foodgrain and fruit traders of Dhanbad on Tuesday met Dhanbad DC Amit Kumar to request him to allow their trade to continue from the market complex.

DC Kumar refused, saying he could not allow the three-tier security of the strongroom to be breached.

Traders said that about a month ago, the district administration took over a section of the market complex about a dozen shops about a month ago to store unused EVMs, but that did not affect them since most of these shops were vacant. But since December 14, the district administration took over half of the total shops of the market complex — around 200 of 429 shops — compelling 60 wholesale fruit force to continue their trade on the road. Also from Tuesday’s blanket ban, the complex was completely out of bounds for traders even though the administration had not taken over all 429 shops.

Talking to The Telegraph, Vikas Kandhway, general secretary of district level trade body Dhanbad Zilla Khadyan Vyavsai Sangh, said they had access to the market till Monday. “From today (Tuesday), the district administration completely sealed off the market and restricted our entry.”

He claimed that if this went on for a prolonged time, not only would wholesale traders suffer huge losses, the masses from Dhanbad, Giridih, Jamtara, Bokaro and Dumka would also face scarcity of foodgrain and other essentials. He claimed that the administration would free the complex only by January 13.

Baldev Arora, a wholesale fruit trader of Barwaddah, said there was another angle that was equally worrying, thousands of daily wage earners who depend on work from the complex for their livelihood have nothing to do now.

“Earnings of thousands of labourers working in the market to unload and load foodgrain and fruits from and onto trucks, lorries and auto-rickshaw will stop. So will the earnings of the transporters, drivers and helpers. Their income also depends on whether the vehicles are hired to ferry foodstuff to the market. We traders met this morning after which we met deputy commissioner Amit Kumar and told him of these practical difficulties that will impact a lot of people, not just us,” Arora said.

Kandhway said they asked the DC if traders could be allowed entry to the market by opening just one of the four gates. “EVMs are stored in only one part of the market while the trade is carried out in a different part, which is why we made this request.”

DC Amit Kumar said they were helpless. “After talks with security forces, we came to the conclusion that to maintain a three-tier security cover for the strongroom we can’t allow entry of outsiders.”

He denied the traders’ charges of taking over the complex till January 13. “We will completely vacate it a day after the December 23,” he said.