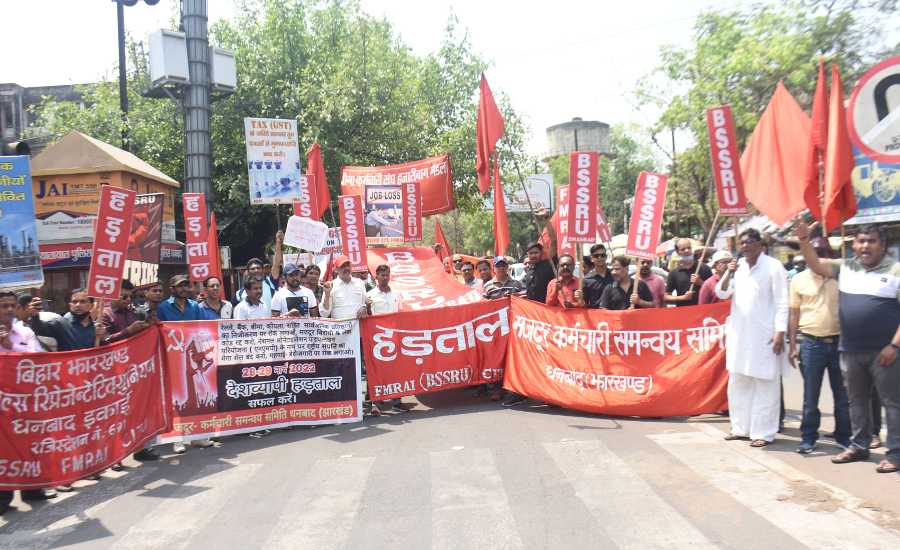 The call for a nationwide strike by central trade unions to protest against the Centre's wrong policies affecting farmers, workers and common people did not affect the transport services on Monday although production in coal mines was partially affected.

The banking and insurance sector however remained the worst hit due to the strike as all nationalized banks remained close except State Bank of India (SBI). Offices of Life Insurance Corporation (LIC) of India across the state also remained closed.

The production and transport of over 150 underground and open cast mines of various subsidiaries of Coal India Limited took a hit in the first half but normalcy resumed during the second half.

All this as bandh supporter trade union leaders reached at the site in the morning and carried out a Dharna and demonstration halting production and road dispatch of coal.

Coal production through contractual staff of private contractors working on behalf of coal companies however remained normal while the coal transportation through railway rakes also continued as usual.

AK Jha, national vice president of Congress affiliated trade Union,  Indian National Trade Union Congress (INTUC) however, claimed that the strike remained completely successful in coal sector and said, “The unity the coal sector employees showed during the strike justifies the cause for which the strike call was given.”

Samiran Dutta, Chairman and Managing  Director of BCCL said, “Though the strike had some impact on coal production and dispatch in BCCL, the exact calculation of the impact of strike is yet to be made.”

“We have earlier appealed to the employees as well as trade union leaders to cooperate with the management as the time is quite crucial for the financial health of the company and any production loss at the moment will affect the efforts to achieve the production target of 30.5 million tones for the current month,” said Dutta.