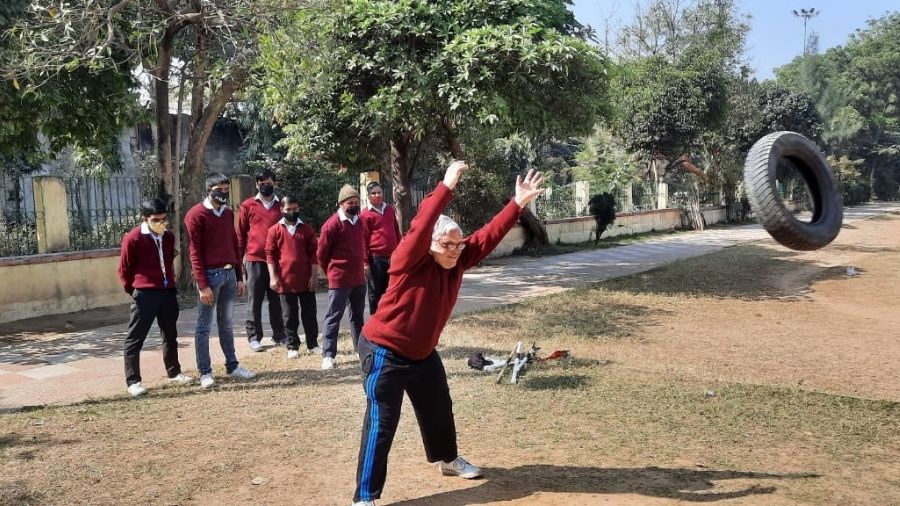 Old scooter tyres seem to have effectively replaced the usual medicine balls when it comes to building strength for the intellectually impaired for a newly-introduced sports discipline.

Special athletes at the steel city are enjoying the mini-javelin throw training stint being imparted by Jeevika, a Sonari-based NGO working for the promotion of intellectually challenged.

"Medicine balls are not easily available in Jamshedpur. So we thought of using scooter tyres to build the back, shoulder and stomach strength of our wards. Training is going on in a hassle-free manner and the athletes are gradually becoming tuned to things," said Avtar Singh, the founder of Jeevika and a former university champion in javelin throw.

According to him, the  tyres weigh around 2.60 kg each and are appropriate for the standard of their wards. "We have also prepared mini-javelins (below 400 grams) by using plastic pipes and floor hockey sticks in our effort to comply with international standards. We are a non-profit organisation operating without availing any government assistance whatsoever. So, we have to go for jugaad," Singh, a seven-time national cycling champion, said.

While Sukhdeep Kaur, secretary of Jeevika, has been  guiding the Jeevika students for the discipline, Singh is carrying out the main field work and training.

Singh said it is essential to build the strength of the athletes so that they can withstand the load of mini-javelin throw.

Each javelin weighs between 300 gram to 600 gram and length is between 27 inches to 44 inches. Hard rubbers were inserted on the rear for making javelin travel like an arrow.

"The mini-javelins made by us are proving handy,” Singh, who is an NIS (National Institute of Sports, Patiala)-accredited coach, said.

"I have never done such kind of exercise. I am enjoying throwing the old scooter tyres. Training is being conducted without any problems," said Krishna, who won two medals (in athletics) in the Special Olympics International World Summer Games held in Abu Dhabi in 2019.