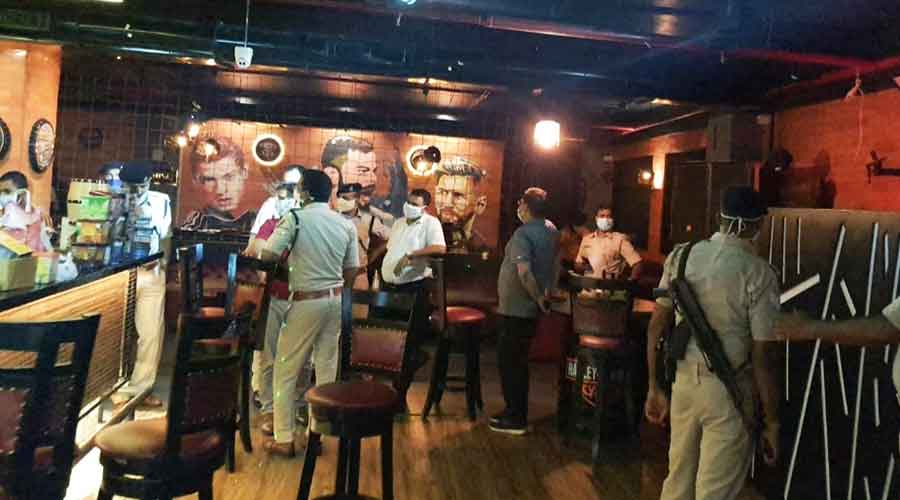 Police and administrative officials carry out the raid at a bar in Sonari on Thursday.
Animesh Sengupta
Kumud Jenamani   |   Jamshedpur   |   Published 19.08.21, 09:33 PM

The district administration on Thursday sealed as many as a dozen bars and restaurants for operating till the wee hours, violating the Covid-19 protocol in the city.

Among the bars and restaurants taken to task includes a bar which had an extended enclosure for serving hookah illegally.

Led by additional district magistrate (law and order), Nand Kishore Lal and superintendent of police (city), Subhash Chandra Jat, the random raids at the eateries and bars started from 10.30 pm on Wednesday and continued till 2 am on Thursday.

"We carried out the raids on the information that several bars and restaurants in the city are operating till past midnight, whereas the permission for running such business is till 10 pm," said Lal to The Telegraph Online.

He pointed out they could raid a dozen restaurants and bars in Bistupur and Sonari localities only due to the time constraints, adding that such raids will continue randomly in other localities soon.

The ADM (law and order) said all the restaurants and bars which were found violating the law will remain closed for the next three days.

Significantly, the administration has lodged an FIR against a bar located along Marine Drive in Sonari for running a hookah bar without necessary license.

City manager, Jamshedpur Notified Area Committee, Ravi Shankar Bharti who was in the raiding party said they recovered 22 hookahs that were being consumed by youngsters around midnight.

"After the unlicensed hookah bar was unearthed at Sonari, Jharkhand Exise's Jamshedpur office was called in for the necessary action against the owner of the hookah bar," said Bharti.

The JNAC's city manager said none of the customers at the restaurants and bars was found wearing masks nor maintaining social distance while enjoying parties there.