‘Everyone is mandated to make the nationwide strike a grand success’ 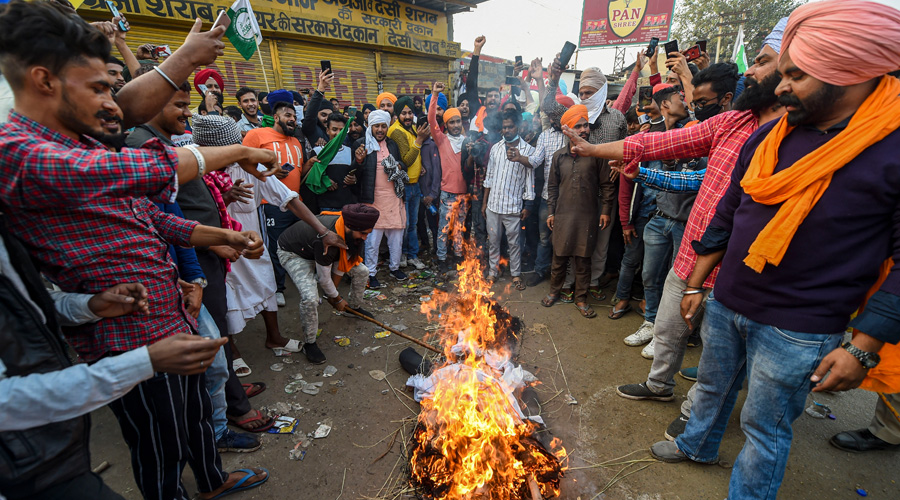 Farmers burn an effigy during their ongoing Delhi Chalo agitation against the new farm laws, at Singhu border in New Delhi on Sunday.
PTI Photo
Our Correspondent   |   Ranchi   |   Published 06.12.20, 09:18 PM

Jharkhand Pradesh Congress Committee (JPCC) directed its cadres in the state on Sunday to get ready for Tuesday’s Bharat Band and stand in solidarity with lakhs of farmers who are protesting across Delhi borders since November 26 against the new farm laws.

State Congress president Rameshwar Oraon directed party workers to come out on the streets with full vigour to make the bandh successful. In a communiqué to workers, he directed, “The party stands with the farmers and their rights and hence everyone is mandated to make the bandh a grand success for everyone’s collective demand of the rollback of the new farm laws.

“Despite the harsh winter and police atrocities against protesters, lakhs of farmers have gathered at the national capital to fight for the cause. Congress, which has always worked for farmers and their causes, should also rise to the occasion by making the bandh a success.”

After the fifth round of talks on Saturday between farmers' leaders and the Centre failed to break the ice, farmers’ unions announced a Bharat Bandh to iterate their demand of repealing the new laws. Nationally, Congress, TRS and Left parties have already extended support to the Tuesday’s bandh.

Congress, which is part of the state’s ruling coalition government along with JMM and RJD, has already held several independent demonstrations and agitations in Jharkhand against the new laws since September. On Saturday, too, the party held a dharna in Ranchi demanding their rollback.

Simultaneously, Left parties and social entities backed by them are also running campaigns against the farm laws daily. On December 10, Left announced a statewide bandh claiming to have the backing of all three parties of the state government.