Special train from Mumbai to Ranchi with few workers

The South Eastern Railway, however, mentioned in a release that it was just a 'single-trip, superfast carrier' run 'to tackle the excessive rush of passengers' 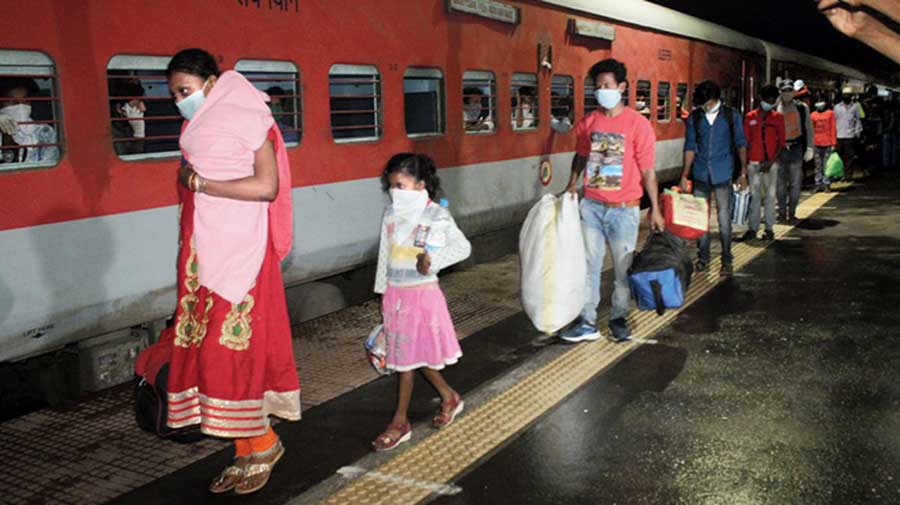 “There were only about 25-odd passengers who travelled up to the destination station, Ranchi, by this train,” Kumar informed, adding others must have got down at other stoppages earlier.
File picture
Achintya Ganguly   |   Ranchi   |   Published 12.04.21, 12:30 AM

A special train from Mumbai reached Ranchi on Sunday that may be described as the first migrant special train.

The Ranchi division of the South Eastern Railway, however, mentioned in a release that it was just a “single-trip, superfast special train” run “to tackle the excessive rush of passengers”.

Leaving Lokmanya Tilak Terminus of Mumbai around midnight of Friday, the 21-coach train that had 12 general compartments reached Ranchi on Sunday afternoon via Itarsi, Mughalsarai and Gaya.

“There is no plan to run any such special train right now,” informed Neeraj Kumar, the chief public relations officer of Ranchi division, when asked if the railways would run more such trains from distant cities for facilitating movement of workers willing to return home from their places of work.

A special train between Surat and Ranchi was likely to be introduced by next week that would run at regular intervals for over a month, he added.

Not many workers, however, travelled to Ranchi by this special train from Mumbai.

“There were only about 25-odd passengers who travelled up to the destination station, Ranchi, by this train,” Kumar informed, adding others must have got down at other stoppages earlier.
Besides those who travelled by this train, many other workers also reached Ranchi from other places by travelling up to either Dhanbad or Gomoh by some other trains and taking a connecting train for Ranchi.

“Mumbai ka sthiti bigad raha tha, fir lockdown hone se fas jate (the condition of Mumbai was worsening and we would get stranded if another lockdown was declared),” said one such worker, Sanghnu Bhagat of Basia (Gumla) who travelled by this train along with his sister Shanti.

They were too scared to stay back and to face the ordeals of another lockdown, said Saghnu who was working as a labourer in Mumbai while his sister also worked as a domestic help there.

The authorities also took precautions so that those who returned home did not spread Covid-19 infection further if they were infected themselves.

The workers who alighted from trains were subjected to a rapid antigen test at the station on Sunday and were allowed to go out only after they tested negative, Kumar informed.