CRPF, police raid leads to shootout at Palamau; no arrests made 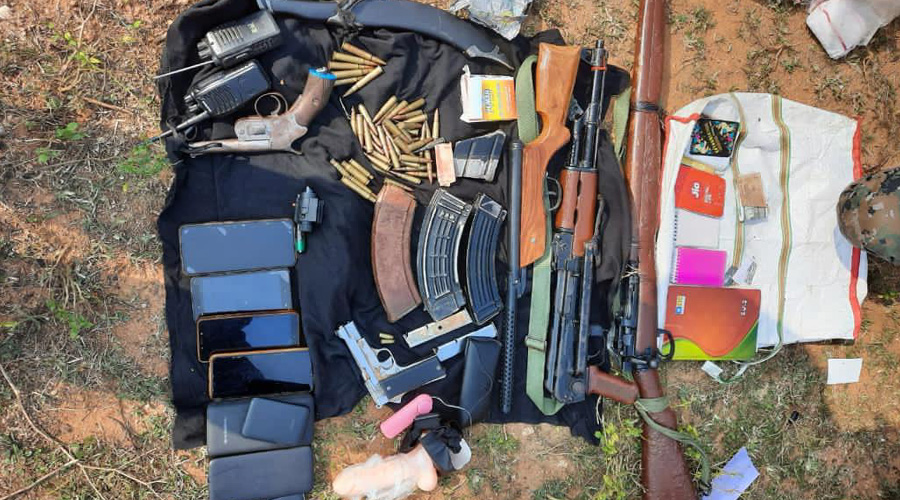 Some of the items recovered from the hideout of Jharkhand Jan Mukti Parishad rebels in Palamau on Thursday.
Telegraph picture
Our Bureau   |   Ranchi, Daltonganj   |   Published 03.12.20, 05:58 PM

Security forces on Thursday recovered a huge cache of arms and ammunition and sex toys from a Jharkhand Jan Mukti Parishad (JJMP) hideout in Palamau after a brief gun battle with the rebels, police said on Thursday.

A CRPF officer said that they also found a polythene sheet which meant that the rebels had spent considerable time there.

JJMP is a splinter CPI (Maoist) group, which is active in parts of Jharkhand. As per records with the Union home ministry, it is one of the 17 splinter outfits in the state, involved in extorting levy from businessmen and killing villagers. Police say that JJMP rebels do not follow the ideology of the CPI (Maoist), the main rebel outfit in Jharkhand.

The raids on Thursday were conducted at Salamdiri under Panki police station, a little over 100 km north-west of capital Ranchi, after the CRPF and police acted on a tip-off based on credible intelligence.

Commandant of the CRPF’s 134 battalion A.D. Sharma said the encounter took place around 9.45 am and lasted for 10 minutes before the rebels, around a dozen or so, fled.

Police failed to nab any of the rebels. “We have made recoveries, but the insurgents fled the spot. Our operations will continue in the area, and the rebels will be caught soon,” said the Palamu SP.

As per data with the MHA, at least 19 of 24 districts in Jharkhand are LWE affected. Apart from the CPI (Maoist), splinter outfits like JJMP, Peoples Liberation Front of India (PLFI) and Tritiya Prastuti Committee (TPC) are active in various pockets of Jharkhand.