One more berth can still be filled up 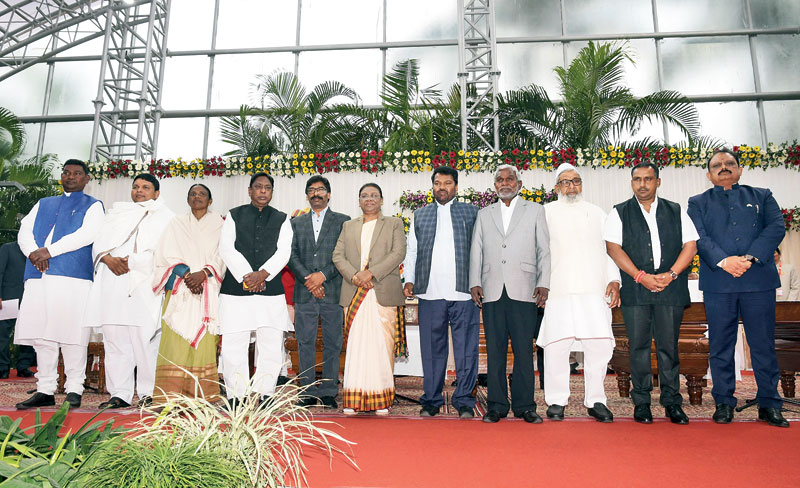 Chief minister Hemant Soren expanded his cabinet on Tuesday with seven MLAs, including a woman, inducted as ministers and taking the total number to 11.

The cabinet has five tribal faces, including Hemant. Two are Muslims. Badal and Thakur are Brahmins while Gupta and Mahto belong to the Vaishya and Kurmi castes respectively.

The Jharkhand state cabinet can have up to 12 members. A senior Congress leader told The Telegraph that they believed the vacant berth would be filled from the Congress quota in the coming month.

“However, the JMM is also claiming this berth,” the Congress leader said.

Among Congress MLAs, Deepika Pandey Singh was said to have a strong claim to a cabinet berth. Close to the former national president of the party Rahul Gandhi, she had strong backing and is known as a firebrand leader with a proven track record to mobilise party cadres. But the party preferred Badal, a second-time MLA, for his loyalty, said a senior Congress leader.

“He was a Congress MLA in the last Assembly when the BJP formed the government along with the Ajsu Party. In order to increase its strength in the Assembly, the BJP tried to split both the JVM and the Congress. The BJP had to abort the plan of splitting the Congress when Badal not only firmly denied the offer (from the BJP) but even informed the party high command. Besides, he is a second-time MLA,” explained the senior Congress leader.