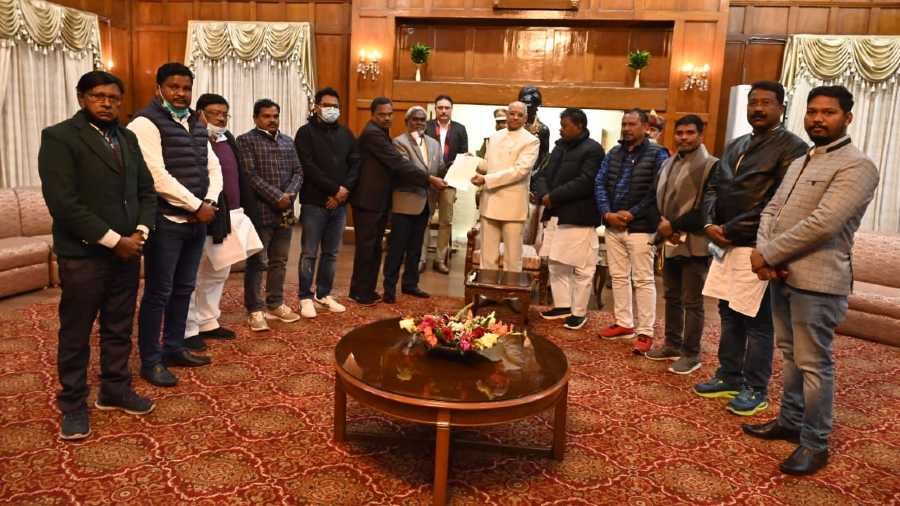 Members of the delegation with governor Ramesh Baia at Raj Bhavan in Ranchi on Thursday.
Telegraph Picture
Our Correspondent   |   Ranchi   |   Published 23.12.21, 09:10 PM

Vice chairman of Tribes Advisory Council (TAC) and state transport minister Champai Soren led an all-party delegation without the  BJP to submit a memorandum to President of India through governor Ramesh Bais on Thursday to demand the implementation of the Sarna code, ie, a separate religion column in the upcoming nationwide census.

The delegation comprised 12 members and party leaders of the JMM, Congress, AJSU-P and tribal outfits that are part of the council.

BJP, the main Opposition party, however, stayed away as it has been boycotting the council since its re-formation early this year, calling it  “unconstitutional” after the chief minister was made its chairman in place of the governor.

After the meeting late on Thursday evening, Soren said, “The Sarna code is a long- pending demand of tribals in the state and in other adivasi dominated regions. Therefore, ahead of the upcoming national Census, we want a separate column for it in the survey as it will provide a distinct identity to tribals. TAC, being the highest constitutional and advisory body for tribal development in the state, has formally submitted its memo to the President through the Governor.”

Implementation of the Sarna code was one of the key poll planks of JMM and Congress, both members of the ruling alliance in Jharkhand. In November last year, Jharkhand Assembly passed a resolution for a separate Sarna code which was sent to the Centre.

Thereafter, in September this year, chief minister Hemant Soren also led an all-party delegation including the BJP to meet Union home minister Amit Shah on the issue. The delegation was, however, told that it would not be possible to include the Sarna code in the upcoming Census.

Thereafter, the council held a meeting under the chairmanship of the chief minister and passed another resolution to send a proposal to the President of India.