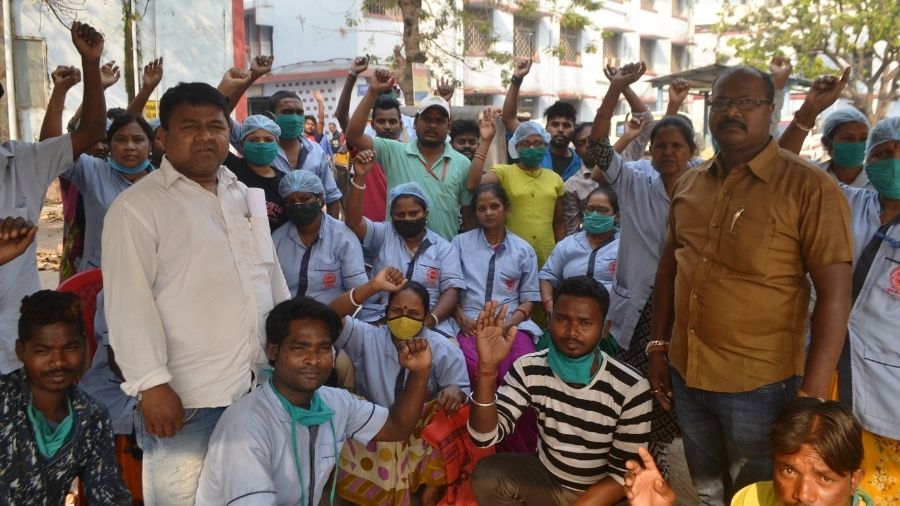 Hospital cleaners during their agitation at the MGM College and Hospital in Jamshedpur on Thursday.
Picture by Animesh Sengupta
Kumud Jenamani   |   Jamshdepur   |   Published 11.03.21, 09:31 PM

All the 60 sanitation workers of the MGM Medical College Hospital on Thursday went on an indefinite strike protesting against the non-payment of regular salary as well as their yearly bonus.

The workers were engaged on contract basis by a Ranchi-based outsourced agency, Shiva Protection Force.

The protesters, who used to carry out their shifts from 6 am till 10 pm, did not turn up for their duty on Thursday, leaving the wards to remain in unhygienic conditions.

Floors of the emergency ward were filled with medical waste and filth as a result.

One of the workers Ravi Namta said that most of them hail from poor families and face difficulties when salaries are not paid to them.

“We have not been paid last months’ salary till now. The contract agency's management maintains that they will pay the salary after their bill is passed by the hospital authority," said Namta while talking to this correspondent.

Significantly, about 100 nurses who are also on contract by the same agency have given an ultimatum to go on strike from Friday over the same issue.