Sale soars higher for made in China lights in Jamshedpur 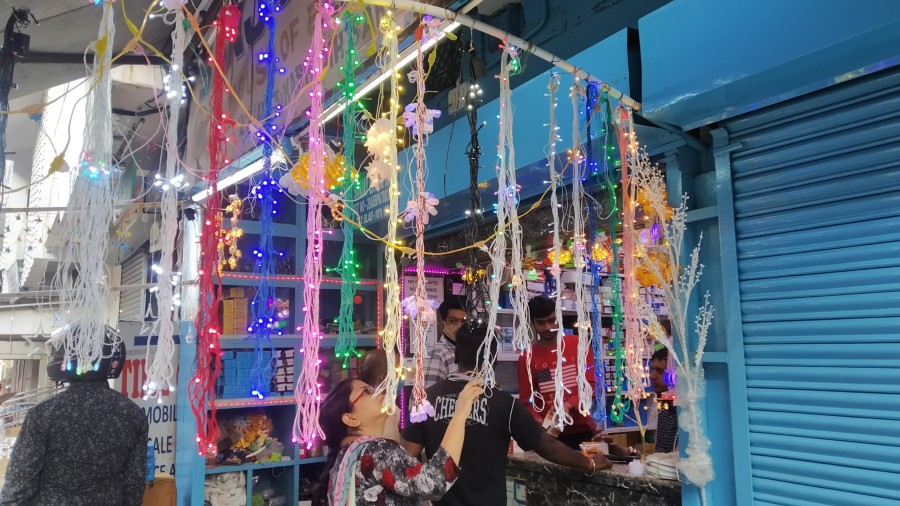 With Diwali round the corner, electrical shops in Steel City are flooded with the Chinese decorative lights, and buyers are flocking the kiosks to buy them. Reason: low-cost price.
In the aftermath of the clashes between the Indian and Chinese military at the Galwan Valley, there were calls to boycott Chinese good. The Indian government had also banned many Chinese applications in a bid to punish China economically.

But with the festival of light approaching, most seem to have forgotten their call and are asking for the cheap Chinese lights, claiming them to be not just cheaper but also far better than the Indian variety of lights. Many buyers were asking for the latest designer mini-light for Diwali.

Around 500 electrical shops across the city are stocked with these mini-lights is available. The Telegraph Online contacted Anurag Kumar, owner of one such shop in the Bistupur market.
“The demand for Chinese mini-lights is much higher than what it was last year. I have run out of my bulk stock of these lights on Monday. People asking for these lights,” said Kumar.

On being questioned about selling Chinese products, he laughed it off by saying that shopkeepers are not going to China to sneak in these lights for sale in India.

“There are several wholesale traders who supply the Chinese lights to us. We know the nerve buyers.  We have no option but to stock the Chinese products. We also have to do business at the end of the say. It’s sad to see that people have forgotten the deceitful attack by the Chinese army,” Anurag deplored.

Significantly, a local businessman who used to deal with Chinese firms informed that the Indian government had given a call for a ban on Chinese products after the death of 20 Indian Army personnel at the Galwan Vallet, but the ban no longer exists.

“Now, several items are being imported from China, just like it was in the past. However, the government has increased the import duty on Chinese products from eight per cent to 14 per cent. Chinese mini-sets are on because there is no ban on imports from China,” said the businessman requesting anonymity.

According to the businessman, the main idea behind increasing the import duty on the Chinese product was to frustrate the buyers, but it seems like the move hasn’t yielded the desired result.

Suresh Sonthalia, national secretary of Confederation of All India Traders, called for the general public to Chinese products. He said, “We should not forget the sacrifices made by our jawans at the Galwan valley earlier this year. Those wishing to buy Chinese lights should recall the entire episode,” said Sonthalia while talking to this website.