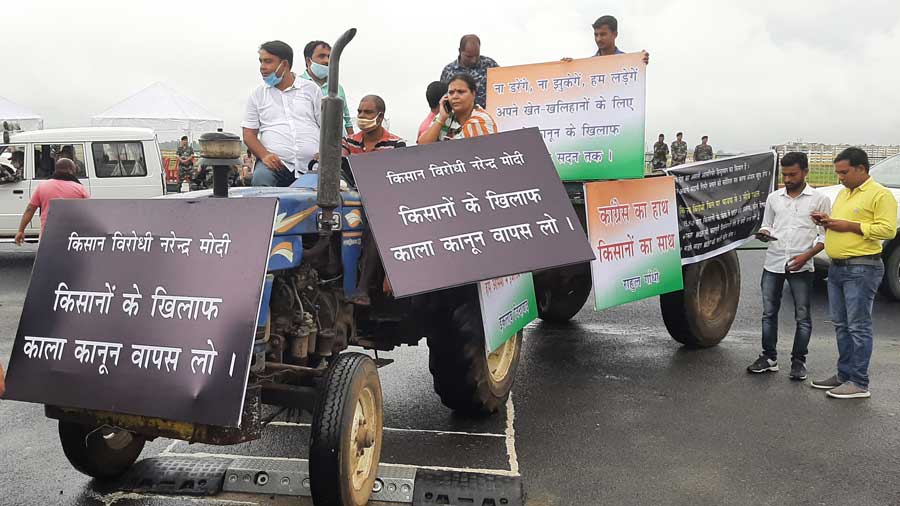 Congress MLA Deepika Pandey rides a tractor trolley to protest the farm bills and to express her support to farmers on her way to the Assembly.
Manob Chowdhary
Our Correspondent   |   Ranchi   |   Published 22.09.20, 09:50 PM

Uproarious scenes marked the last day of the Jharkhand Assembly's monsoon session, with the Speaker adjourning the House twice during the day as BJP members created a ruckus, demanding a discussion over cancellation of a job policy by the high court.

The Jharkhand High Court had on Monday scrapped the recruitment of over thousands of teachers and officials, finalised in accordance with a 2016 policy, which prescribed 100 per cent reservation in grade III and grade IV government jobs for local candidates in 13 scheduled districts.

The court declared the policy, which came into being during the BJP rule, as null and void, saying that 100 per cent reservation for jobs violated Fundamental Rights.

Shortly after Question Hour began, BJP MLAs sought a discussion on unemployment, and the fate of candidates who had lost job due to the high court's decision. The party had earlier moved an adjournment motion in the Assembly in this regard.

Speaker Rabindra Nath Mahato, however, refused to entertain their demand, prompting the BJP legislators to storm the Well of the House and raise slogans against the JMM-led state government.

Mahato said he would not tolerate "hooliganism" and asked the protesting MLAs to stop the ruckus, to which BJP legislator Randhir Singh said they would not budge and the "House shall continue to run in this manner".

Singh was subsequently marshalled out of the House.

Talking to reporters outside, the BJP MLA said, "Is it hooliganism to oppose the government?"

As the din continued, BJP MLA Bhanupratap Shahi sought a statement on the high court verdict from chief minister Hemant Soren, who was not present in the House at the time. The Speaker then adjourned the Assembly for an hour.

The CM arrived in the House when the proceedings resumed at 12.30 pm and said his government was suffering due to the mistakes made by the erstwhile BJP dispensation.

The previous government went against the Constitution and reserved all class III and IV government jobs for local people in 13 scheduled districts, as a result of which the high court scrapped the policy, he said.

Hemant said, "Jaisi karni, waisi bharni (as you sow, so you shall reap)", targeting the previous government, following which the BJP MLAs created another uproar in the House, claiming that the policy was made in the interest of local people, and the government did not present proper arguments in its favour in the high court.

The Speaker adjourned the House again till 2 pm.