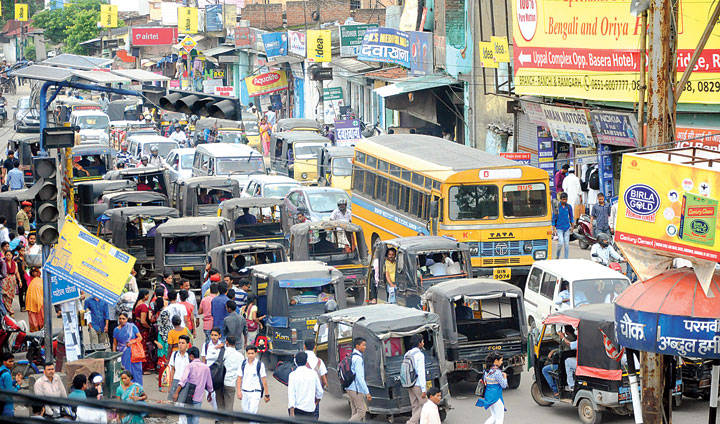 Kantatoli Chowk, which will be one of the start-and-terminal points of the electric bus service that is expected to roll by October this year.
Picture by Manob Chowdhary
Animesh Bisoee   |   Ranchi   |   Published 17.01.20, 07:32 PM

Get ready for shuttle service on electricity powered mini-buses in the state capital by October this year.

“Acting on the directive of the principal secretary of the state urban development department Ajoy Kumar Singh, we have finalised two routes for the 14+1-seater (14 passengers plus driver) electric bus shuttle services and bids will be invited for service providers soon,” a senior RSCCL official said on Friday.

“We are hopeful of starting the bus service before the festive season in October this year on these two routes. The routes have been drawn up in such a manner that they cover most parts of the city. Depending on the response, we will be increasing the routes later on,” the official added.

The buses will have low-floor configuration, which are easy to get on or disembark from.

“The second route will cover a distance of nearly 29 km,” the RSCCL source said. “The objective of introducing such buses — both fuel driven and battery operated — which have more seating capacity than the auto-rickshaws is to decrease traffic congestion caused by such auto-rickshaws as people will opt for such buses. We plan to roll out nearly 150 such buses.”

“The environment-friendly battery operated buses will ply on the two routes selected based on traffic density and cover most of the capital,” he said.