The elephant, mahout and his aides were first spotted by people near Golf Ground in Dhanbad on February 28 evening 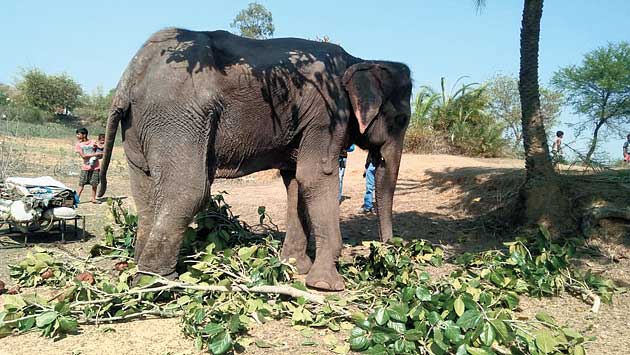 Captive elephants Champa and Rajni will soon have company as a rescued female jumbo is likely to join them at Dalma Wildlife Sanctuary in a couple of days.

The 50-plus elephant and her mahout Sanjay Kaparia, who were recently detained by forest authorities in Deoghar, are expected to be handed over to Ranchi wildlife division that looks after Dalma sanctuary.

The elephant, mahout and his aides were first spotted by people near Golf Ground in Dhanbad on February 28 evening.

According to Deoghar DFO Premjit Anand, the elephant would be handed over to the Dalma authorities after completion of paperwork.

“We have to see whether the animal is medically fit for travel. There are transportation protocols for shifting wild animals,” he said.

Anand said they were informed about the presence of the elephant in their jurisdiction on March 1 by their Dhanbad counterparts.

“We have seized the animal and are verifying the papers confiscated from the mahout,” the DFO said, adding that the aides of the mahout were released after interrogation.

He said Kaparia would accompany the elephant to Dalma, 260km from Deoghar.

“The elephant listens to the orders of the mahout. So it is necessary to send him (mahaut) to Dalma,” Anand added.

He said they were verifying the name of the elephant’s owner and would lodge a case against him under the Wildlife Protection Act.

Sources said the elephant and mahout had come from Uttar Pradesh for Shivratri fair in Dhanbad but fled to Deoghar after people questioned the mahout for using the elephant for begging.

Anand said Dhanbad forest authorities should have seized the elephant and verified the documents because the animal was found in their operational area.

“We have been unnecessarily burdened to take up this responsibility,” he added.

Sources said the elephant and mahout had come to Jharkhand from Uttar Pradesh for Shivratri fair in Dhanbad but fled to Deoghar after people in the coal town questioned the mahout for using the elephant for begging.

Dhanbad DFO Vimal Lakra said residents informed him about the presence of the elephant near the Golf Ground on February 28 evening. “Since it was already late, we started searching it on March 1. But by that time, it had reached Deoghar,” he added.

Dalma range officer R.P. Singh said the jumbo was expected to reach on Sunday morning, but it did not materialise.

“We had planned a grand welcome for the elephant. We will also garland it and distribute sweets at Makulakocha village where Champa and Rajni stays. We think the elephant should be here in a couple of days,” Singh added.

The range officer said the elephant would face no problem in mixing with Champa and Rajni. “All three are captive and mixing with each other will not be an issue,” he added.

Eleven year-old Rajni had fallen into a well in Seraikela-Kharsawan in 2010 before being rescued by foresters. Champa, about 40-year-old, was also rescued from vagrants in Jamtara the same year. Both are being rehabilitated at the sanctuary.