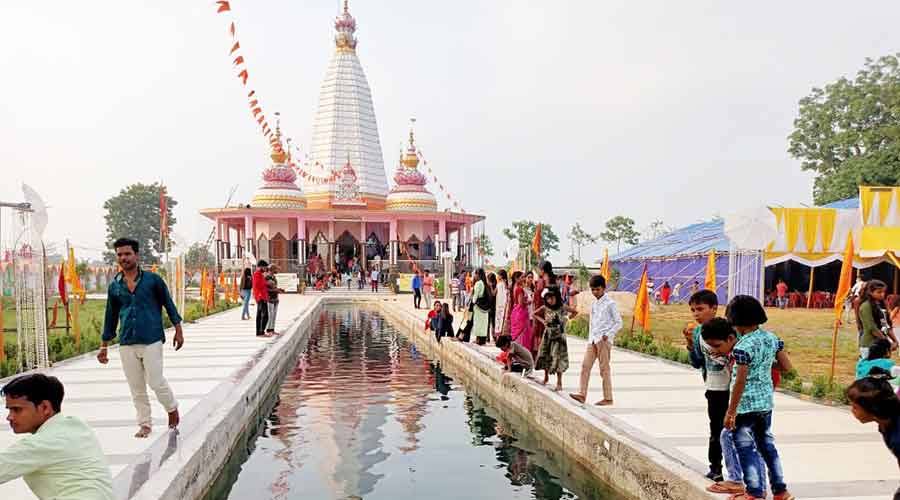 Renowned Mumbai architect Rohit Kumar has been roped in to design a Rs 7 crore temple on two acres of land in a remote village of Daru block in Hazaribagh.

Construction materials have been brought from different states for the grand temple situated in Punai village.

The temple is situated between Ichak and Daru block and accessible by taking the Ranchi-Patna highway crossing Ichak Bazar, Chanda and Kariyatpur village. Another route is through Giridih-Bokaro road taking Punai from Jhmura. From both routes, the distance is almost 30km.

A former banker Anil Deo is spearheading the project. He said it took almost ten years to get the Sankatmochan Hanuman Mandir ready. People donated generously to make this temple a reality in this remote village.

Sources said an expert from Makrana of Rajasthan, Babu Chaudhary, designed the interiors. Masons from Calcutta stayed here and completed the construction work. Marbles came from Makrana and bricks were brought from Didargunj of Bihar and Chandauli of Uttar Pradesh. The temple has two giant grand gates with a huge dome. The boundary walls have pictures depicting Ramayana stories. Idols were brought from Rajasthan.

Sources said as the temple opened its gate for devotees four days ago, people started coming here from different districts making it the hotspot of the district.

One of the devotees, Sanat Kumar of Barkatha said he came here after word of mouth. “It is a new attraction in the district,” he added.

Senior BJP leader Bateshwar Prasad Mehta said Ichak is known for its 250 ancient temples. Punai was earlier in Ichak till a few years back. When Daru block came into existence, Punai became a part of it, he added. Each temple in Ichak with trees and ponds is called a place of 3Ts.

“Punai situated close, the new temple also falls in the same circuit which will be easy for devotees to visit in one go. I request the state government to develop and maintain all the ancient temples of Ichak,” he said.