Radisson Blu, the hotel where Team India are putting up, has turned into a temple for cricket lovers 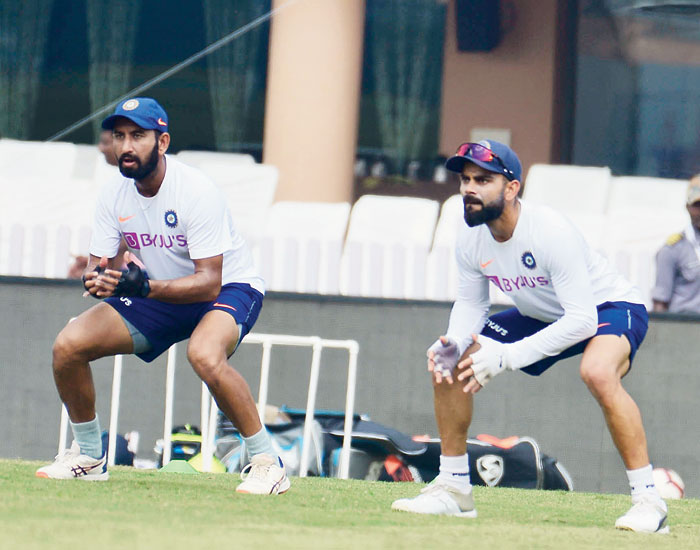 Radisson Blu, the hotel where Team India are putting up, has turned into a temple for cricket lovers.

Enthusiasts of the game and worshippers of the players poured in at the city hotel hoping for selfies with and autographs of their gods before India face South Africa at JSCA Stadium in Ranchi from Saturday.

Though with a 2-0 lead the Indian team is comfortably placed at the points table of the ongoing test series, the capital is agog over the Test.

“From the time I heard the Indian cricket stars are staying at the Raddision, I visited the hotel at least six times every day just to catch a glimpse of the stars. I first land here at 8am and then keep coming till 11am and then I head to my coaching class,” said Kadru resident Anurag Lal, 17, who is preparing for medical entrance tests.

So far, his idol-spotting hasn’t been too disappointing.

“I have seen Cheteshwar Pujara, R. Ashwin, Ajinkya Rahane and Virat Kohli. I am waiting to click some selfies with them but the security personnel are not allowing anyone to go near the players,” said Anurag, who said he was a right-arm fast-medium bowler.

Mohammed Shanawaz, a resident of Central Street in Hindpiri, was upbeat too.

“I am wicketkeeper-batsman of Argora Cricket Club and I have also played A-division cricket. I want to click some selfies with the team and would also like to speak to them for some time,” said Shanawaz, who was accompanied by one of his cricket-lover friends, Mohammed Kahleed Anwar, in front of the hotel.

Even police guarding the South Africa team were happy providing security to the international guests.

“So far I could identify Faf du Plessis, Quinton de Kock and Kagiso Rabada. The players are very friendly. When we raise our hands to say hello, they reciprocate with smiles on their faces,” said Birendra Yadav, deputed with the fire-brigade team outside hotel Le Lac on Line Tank Road, around 13km from the JSCA Stadium.

Daniel Paharia, a constable with the Paharia Battalion, was happy too.

“I play football — centre forward — but never played cricket. I am happy being here as I enjoy cricket too. I can speak English and Thursday evening I had a chat with one of the officials of the South African team,” said Paharia laughing out loud.

Inspector Manoj Kumar Rajak, who was deputed at Le Lac, said residents were crowding more at Radisson Blu, around 10km from the stadium, because of Team India.

“Common people in the city do not understand the language of the South African players and many don’t recognise them. Since not many are keen on meeting the guests there’s not much problem in maintaining law and order at Le Lac. In the morning when the players hit the road for jogging, we remain extra alert for their security,” said Rajak.

On Friday, speaking briefly to reporters present at the stadium, India’s ace wicketkeeper Wriddhiman Saha said: “Everyone wants to contribute his best for the team.”

Reminded of his brilliant role behind the wickets in Pune, Saha said: “Of course I feel really very good for those two catches.”

He said he hoped to contribute runs too in Ranchi.

“We are yet to see the pitch as we used the practice pitch today (Friday),” Saha replied when asked about the pitch and said he was hopeful it would help batsmen.