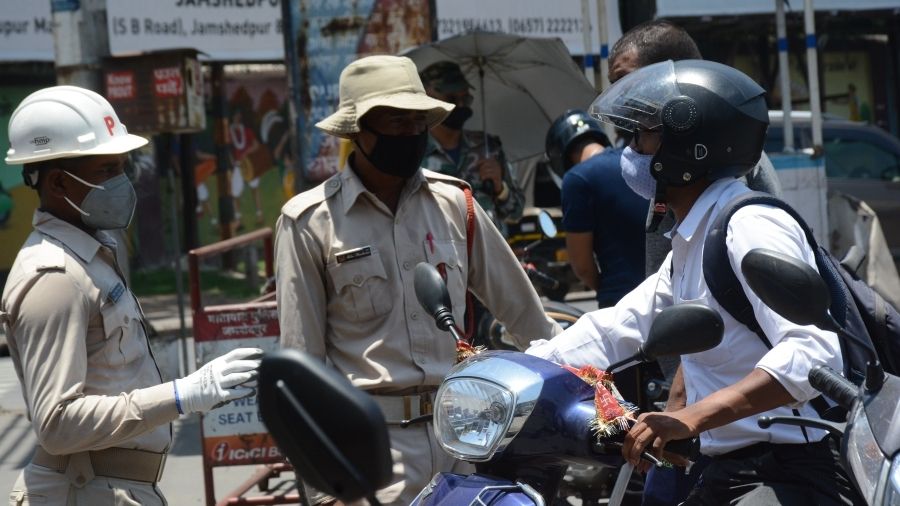 The Jharkhand government made e-passes mandatory for all intra and inter-district travel since May 16 as a part of lockdown regulations.
File picture
Our Correspondent   |   Ranchi   |   Published 25.05.21, 07:04 PM

Ranchi district administration has launched a crackdown on those who obtained e-passes, mandatory permits required for commuting during the lockdown, on dubious credentials.

District transport officer Praveen Kumar Prakash said on Tuesday that FIRs had been filed against half a dozen persons so far based on the complaints received from various sources. He added that the district administration had asked law enforcers on the ground to take stringent action against such malpractices.

“Last night (Monday), we slapped FIRs against five persons after tracking the IP addresses of computers from where e-passes were generated on fake IDs. We had received complaints about the use fake names and vehicle numbers. Officials checking e-passes on streets have now been asked to be more vigilant to curb such fraudulent activities,” he said, adding that few days ago, the department had arrested one person from Doranda for running a racket in generating fake e-passes for a fee.

The Jharkhand government made e-passes mandatory for all intra and inter-district travel since May 16 as a part of lockdown regulations that is scheduled to be in force till Thursday, May 27. Only those undertaking travel within or outside the district for medical reasons or vaccination are exempt from carrying e-passes.

The state transport department had launched a portal (epassjharkhand.nin.in) for people to register themselves using their phone numbers and get an e-pass after providing other relevant details. So far, over 10 lakh e-passes have  been generated. But many seems to have been generated using fake names.

The e-pass system is likely to be extended further as the state government is expected to extend the lockdown period by another week. Many cabinet ministers, during a meeting with chief minister Hemant Soren on Monday, demanded such an extension citing its positive impact on decreasing cases of Covid-19.