Ram temple would come up in Ayodhya within four months, says Amit Shah 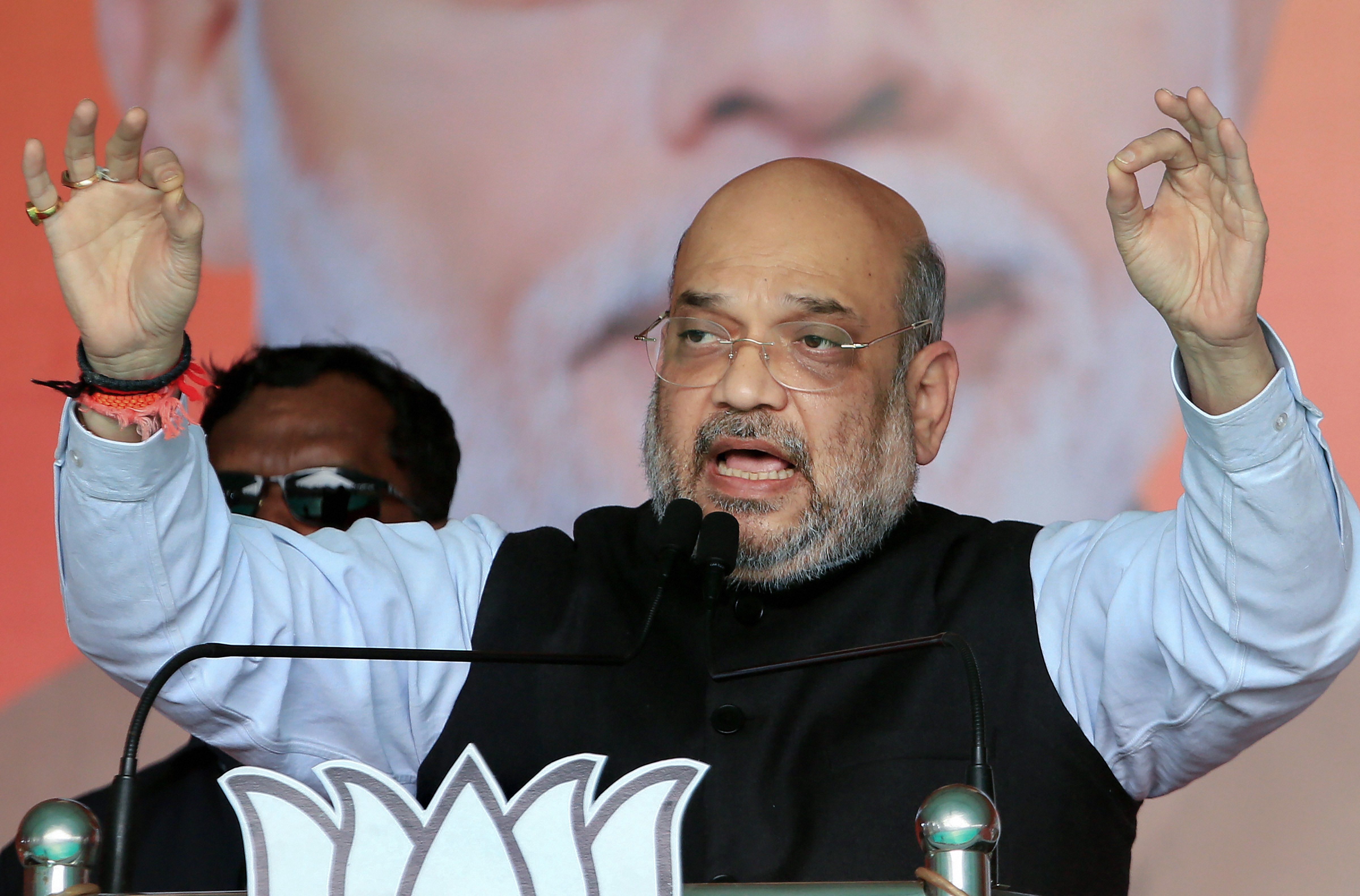 BJP president Amit Shah on Monday said a sky-touching Ram temple would come up in Ayodhya within four months, which Indians from all over the world have been demanding for 100 years.

Making a blistering attack on the Congress, Shah asked its leader Kapil Sibal why he sought to drag the Ram Janmabhoomi case in the Supreme Court.

The BJP president was addressing an election rally in Pakur in favour of the party candidate.

His another poll meeting is lined up at Kamli Baghicha maidan, Poraiyahat, in the neighbouring Godda district.

Not long ago, the Supreme Court gave its ruling on Ayodhya, there was a demand of Indians from all over the world for 100 years that a grand Ram temple should be built at Ram Janmabhoomi, he said.

'I want to tell you that the Supreme Court verdict has come, a grand Ram temple touching the sky is going to be built in Ayodhya within 4 months,' Shah said.

The BJP president asked the people to be on guard against 'traitors' like Mir Jafar, alleging the Congress could neither develop the country and secure its borders nor honour the sentiments of the people.

Saluting the tribal freedom fighters who had launched 'Santhal Hul' (revolution) against the British, Shah told the poll rally it was traitors like Mir Zaffar who had allowed the British to establish their 'raj' (rule).

'Even today I will tell (you) that identify traitors like Mir Jafar, who should not become your representatives, and vote for the BJP. The 56-inch Narendra Modi can develop the country and protect the country,' Shah said without naming anybody.

'(JMMs) Hemant ji (Soren) wants to become chief minister sitting in the lap of the Congress. I would like to ask Hemant Soren who had opened gun-fire, tear-gas and resorted to baton-charge on the youth of Jharkhand during the statehood movement? If you don't remember, ask Guruji (as Shibu Soren is referred to in the state),' he said.

'It was the Congress/RJD and Lalu Prasad who forced the youth of Jharkhand to martyrdom while the BJP-led Atal Bihari Vajpayee government had created Jharkhand,' he added.

'Now you made an alliance to become chief minister. You should feel ashamed of stooping so low,' Shah said apparently taking potshots at Hemant Soren, who is JMM's working president.

Asking the JMM leader why 'Naxalism grew' during his time even though he raised issues like 'jal, jungle and jameen (water, forest and land)', Shah said 'it is Narendra Modi government which has buried Naxalism 20-feet under the ground'.

Listing out a host of welfare and developmental schemes and programmes of the BJP-led governments in the Centre as well as Jharkhand in the past five years, Shah said, 'Rahul baba (Gandhi) is talking about development. I have given an account of developmental works.'

'Even BJP's youth morcha president or worker can give the account. You will not know as you are wearing 'Italian chasma' (goggles),' he said poking fun at the Congress leader.

Shah also promised to increase reservation percentage of the OBC without reducing the SC/ST reservation and said OBC commission would be accorded constitutional status in Jharkhand.

He also ridiculed the Congress and the JMM leaders for reportedly asking what Jharkhand has to do with the country's security.

'Several youth of Jharkhand are with the army, the CRPF and the BSF, guarding snowy mountains, and they ask what Jharkhand has with the country's security,' Shah said.

Shah also touched upon issues of abrogation of Article 370, 35 A, surgical strikes and airstrikes following Uri and Pulwama terror attacks.

Pakur is going for the fifth and final phase of polling on December 20.