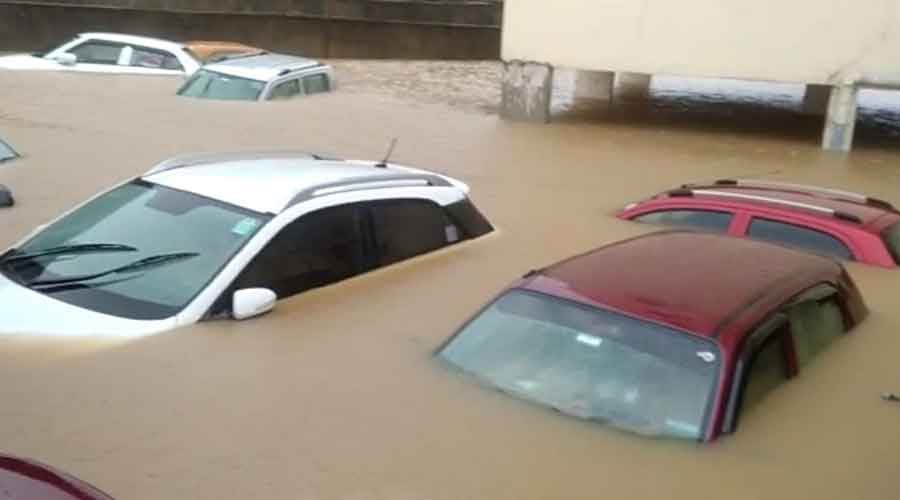 Cars under water in a flooded parking lot of an apartment complex at Kathal More in Ranchi on Saturday.
The Telegraph picture
Our Correspondent   |   Ranchi   |   Published 31.07.21, 07:48 PM

Widespread showers of the last 48 hours disrupted life in Ranchi and several regions of Jharkhand on Saturday with reports coming in that three of a family were killed in Jamtara district, some 250km from the state capital, after their car fell in a rivulet.

Several parts of the state capital were flooded because of the incessant rain since Friday. In the last 24 hours, Ranchi recorded 180mm rain, noted the local  Met office. Widespread power cuts added to the misery.

In Jamtara, the bodies of the three accident victims were fished out on Saturday morning after local residents spotted the car in the rivulet. The family from Ranchi was travelling to Bhagalpur when their car fell into a rivulet along the Govindpur-Sahibganj highway under Narayanpur police station late on Friday night.

Police said visibility must have been poor because of the heavy rain and accompanying storm.

In all, four persons were travelling in the car. One of the occupants managed to jump off before the car hit a railing of the bridge and plunged in the rivulet. Manoj Kumar, officer in-charge of Narayanpur police station, told the media that efforts were on to identify the bodies. “We learnt that four persons, possibly of the same family, were travelling to Bihar (Bhagalpur) from Ranchi when they met with the unfortunate incident. Further probe is on,” he said.

Several areas of Ranchi were indundated  since Friday. On Saturday, a large stretch of Argora Chowk on Harmu Road, also known as Raj Path (VIP Road) that connects Raj Bhavan to the airport and Project Building, got flooded after water from a local pond flowed into the street due to clogged drains.

An official of Argora police station said, “I don’t recall the last time such an important road turned into a pond due to rains. Rampant construction all around have damaged drains as a result of which the area got flooded. Traffic had to be diverted due to the water-logging.”

Sudhir Kumar, who runs a confectionary shop Argora Chowk, said he had suffered heavy losses. “All my stocks got damaged as the flood water entered my shop last night, damaging furniture and electricity cables,” he said.

Large parts of Piska More, another heavily populated area, turned into a cesspool.

Most cars and bikes at the ground floor parking lot of Lavleen Apartments were almost totally submereg under water. Rakesh Sinha, a resident of the complex, said, “We face flood-like situations every year whenever it rains. No matter which government is in power, our woes are never solved. Need of the hour is to have a proper drainage system in the entire city.” 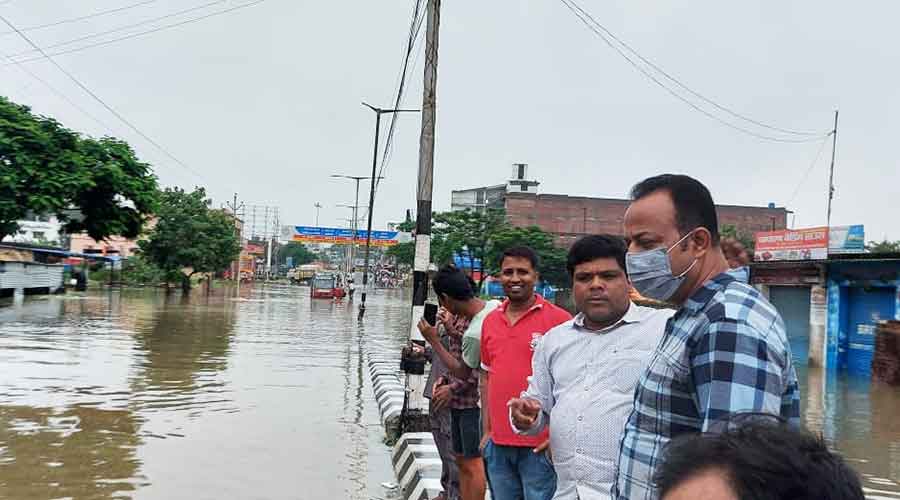 Ranchi Municipal Corporation (RMC) officials maintained that they would begin clean-up operations in the flooded areas to prevent the outbreak of  disease. Town commissioner Mukesh Kumar’s phone remained switched off. But a city manager not willing to be named claimed that the civic body had undertaken a massive cleaning exercise of all drains across the city ahead of the monsoon. He blamed volume of rain for the flooding.

“In the run up to the monsoon, RMC undertook a mega drive to clean all drains for the first time in the city. But in many areas, there are encroachments, illegal constructions. That's the reason behind the flooding, " he said.

Between 2014-19, when the BJP government was in power, it launched a Rs 400-crore city drainage construction project for the capital but it was ineffective due to poor planning. Congress, which is part of the ruling alliance in the state, on Saturday attacked the BJP and its MLA in Ranchi, C.P. Singh for failing the capital city.

Congress spokesperson Alok Dubey said, “The situation in Ranchi today exposes the BJP government’s drainage construction project which was poorly planned, executed and mired in corruption. Most importantly, Ranchi MLA C.P. Singh, who is a five-time lawmaker from the capital, must take responsibility for the civic mess as he was the minister of state urban development department for last five years.”