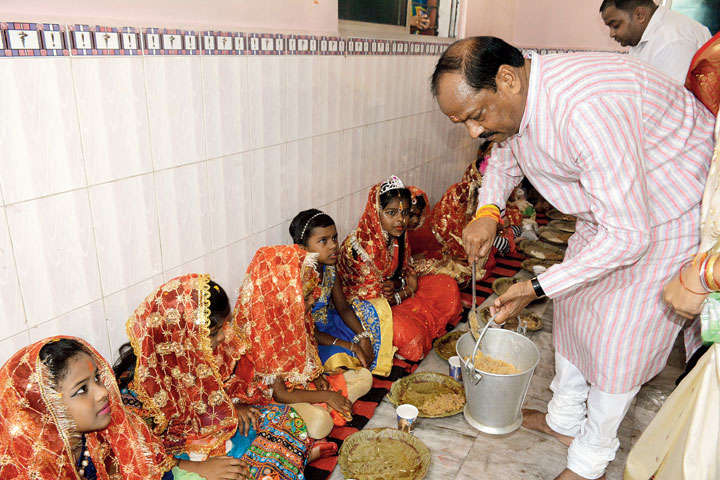 Chief minister Raghubar Das will burn a 65-foot effigy of Ravan, a 60-foot effigy of Kumbhakarn and a 55-foot replica of Meghnad at Morabadi ground on Tuesday for Vijaya Dashami.

He claimed the firecrackers this year will “ensure least pollution”.

“For example, we have a rocket which will go up to the height of 400 feet unlike previous years rockets which went up to 350 feet. After the rocket will burst it will emit colourful light with minimum smoke,” he said.

Like every year, the district administration has prepared elaborately for the chief minister’s programme.

“Entry of vehicles towards Morabadi ground has been restricted from 1pm till the dispersal of crowd in the evening. Squads for detection and defusing explosive items have been deputed,” said Arvind Kumar Singh, OC, Lalpur police station.

Jamshedpur: Chief minister Das on Monday performed kanya puja on the last day of Navratri at Shitla Mandir at Bhalubasa. “I believe a strong nation is only possible when its women are empowered and educated. Therefore, in whatever schemes the state government rolls out, women and girls will be our priority,” the chief minister said.

He was accompanied by wife Rukmini Devi, son Lalit Das, daughter Renu Kumari, daughter-in-law Purnima and other close relatives. Das offered prayers to nine girls aged below 12. He also offered a chunri, a token amount of Rs 251 and bhog, comprising halwa, puri-sabzi and kheer, to over 700 young girls for kanya puja at the Shitala Mandir.