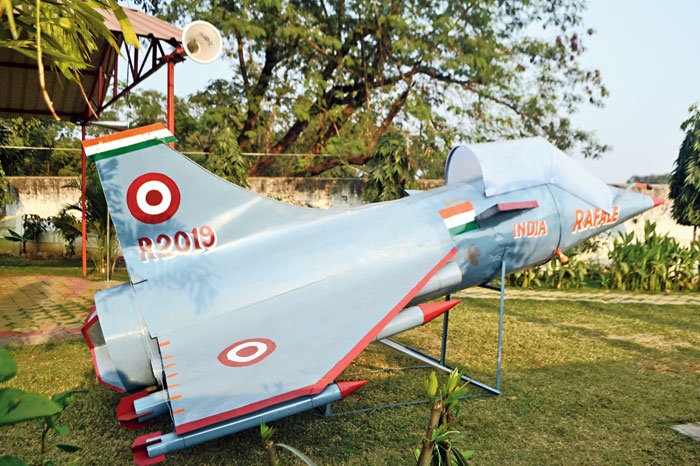 From campaign vehicles fitted with large LED screens to the replica of a Rafale jet installed at Raghubar Park in Burmamines, the BJP is using all possible props to woo voters as the poll contest hots up in Jamshedpur East Assembly constituency.

While the LED screens are trumpeting the achievements of the Raghubar Das-led government in the state, the aircraft model hails the Supreme Court’s verdict dismissing pleas seeking a review of the controversial Rafale deal that came as a blow for the Congress.

He said the Rafale replica had been made by 25-year-old physically challenged person Mithu Sharma. The tin-and-iron model was made at a cost of Rs 6,500 in Bihar’s Chhapra district.

“People in large numbers are turning up at Raghuar Park to have a look at the Rafale replica,” Tiwary said.

He said using the Rafale model during the campaign was his idea.

“It was me who had pitched the idea on Rafale aircraft about which Rahul Gandhi had ranted so much during the Lok Sabha elections. I wanted Rafale to be etched in the minds of people, especially children, as the pride of the country,” Tiwary said.

Most of the other partymen who are out campaigning for Das are those who have received the chief minister’s blessings in running their businesses, especially in building construction. Prominent among them are Tuntun Singh, Sanjiv Singh and Pawan Agrawal.