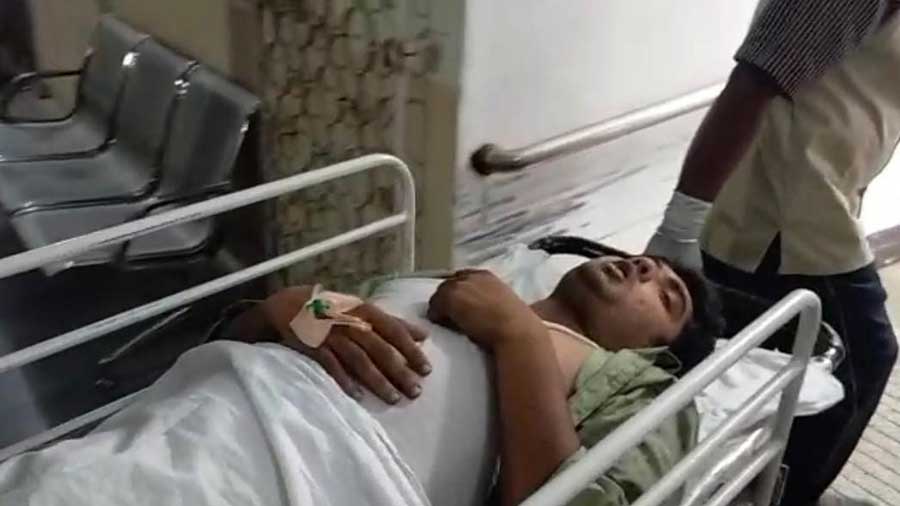 The 26-year-old son of a PWD contractor was shot at and injured by two scooter-borne assailants at Ganesh Puja Maidan in the Kadma police station area on Dashami night.

The injured, identified as Asfaque Khan, has sustained an injury in his right thigh and has been admitted at Tata Main Hospital, where he is yet to be operated upon.  Though the pellet is still stuck in the victim’s thigh, he is said to be out of danger.

In his statement to police, Asfaque has alleged that Mohammed Sajjad and Chintu Khan shot at him after an altercation over an extortion bid by the duo.

According to the statement, Asfaque, who is the son of Mustaque Khan, a resident of Dhatkidih, was returning home from a medical store in Kadma market around 10pm. Sajjat and Chintu who were on a scooter intercepted him and asked him to pay Rs 1 lakh every month if he and his father wanted to run their contract business in the city. On protesting, he was shot at by Sajjad. “He fished out a pistol from his waist and fired a shot at my thigh, causing me to fall down. This prompted some people to rush to the spot. The duo fled. While fleeing, Sajjat, who was driving the two-wheeler, ran over my legs,” Asfaque said.

Sajjat and Chintu are members of a gang that was allegedly involved in an attack at Dhatkidih on October 5, which left some local residents injured. Chintu is the nephew of local JMM leader Firoz Khan.

Mustaque said Chintu and his associates were involved in an attack last year on his son.

Four held over rape of eight-year-old

Four persons, including a juvenile, have been arrested for allegedly raping an eight-year-old girl  in a village under Manjhiaon police station on October 21.

An FIR had been filed regarding the incident at Manjhiaon police station.

The accused persons, Nasiruddin Khan, Nadim Khan, Khurshid Khan and the juvenile, are residents of the victim’s village. Three of the accused were remanded in judicial custody, while the juvenile was sent to a children’s home.

On the complaint of the victim’s father, a case under Section 376 (D) (punishment for rape) of the IPC and Section 4 of the Protection of Children from Sexual Offences (Pocso) Act was registered against the accused persons, investigating officer Shyam Lal Gupa said.

The ventilator at the SBI branch.
Vishvendu Jaipuriar
Break-in attempt at Chatra bank

A break-in attempt was foiled by police in Chatra after they received a tip-off regarding some unusual noises coming from the branch of a public sector bank.

A ventilator was used by a few persons to enter the premises of the SBI branch at Tapej. They were trying to cut a hole in the shutter when someone informed the police regarding the noise. A patrolling party was sent to the branch which remained outside the building. The police personnel kept knocking on the main entrance from the outside.

Those who had entered the branch illegally panicked on hearing the policemen knock and fled. However, before leaving, they damaged the surveillance cameras and strew documents on the floor.

The bank branch was closed due to Durga Puja. Bank officials learnt about the break-in attempt on Tuesday when they reopened the branch.

The police were critical of the bank officials for not getting the ventilator closed despite being asked to earlier. The police have launched an investigation.

Vigilance Awareness Week commenced at CCL Rajrappa on Tuesday. General manager of the Rajrappa area, Alok Kumar, administered the vigilance oath to all officers, employees and leaders in the presence of vigilance officer Ajay Kumar.

This year, the theme of the Vigilance Awareness Week is “Vigilant India, Prosperous India”.

After the vigilance oath programme, posters were pasted on vehicles and in various places by the officials.